Survival – big one right? If you’re reading this as a lover of the outdoors, chances are you’ve been out there, out on the edge somewhere: a lake, mountain, desert, forest –along some long and thin winding topo line a far ways from home. You’re familiar with that unique feeling that clings like a sleeping dragon to the inside of your stomach, and doing all you can to dance about and not wake the bastard up.

We all know the first rule in a survival situation is don’t put yourself there in the first place. But by our nature we’re a breed that’s hard to talk out of well-laid plans, in fact we often take adversity as an excuse to expand our capabilities. Thin line indeed. Want to harden up some? Go jump in the surf when everyone else is shivering in their wagons and watching from the parking lot. Start up a 3 pitch route with dark clouds rumbling overhead and a 65% chance of rain. Grab the dog and head out the door as the first flurries drop from approaching tip of a forecast snowstorm.
But what of it when things get really bad. When the guys watching from their cars see the swells pick up a bit taller and the rip currents start dragging with enough force to reclaim a scuttled tanker? When the overhead clouds start throwing lightning bolts like some pissed toddler and you and your partner are pinned to the side of a cliff 300 feet off the deck wearing skirts made from metal?

Thankfully the kind folks over at Mountainsmith keep cranking out gear that keeps us afloat in crucial situations, from dumping storms to keeping our wilderness necessities secure and stable as we scramble out of harm’s way. First step in survival is preparation, and Mountainsmith takes the variables out of that equation.

However, preparation and preservation only go so far – what happens when you’re actually in the soup?

I’ve had my share of epics aka type III fun aka full-on disasters; my preferred terminology is “full value,” a phrase that makes my climbing partners cringe. I’ve been benighted out on rock climbs, wandered lost in the desert, have done my best “cat on drapes” impression while free-soloing ice climbs, rappelled for 7 hours through the dark down some remote snow and ice covered face, and dodged lightning bolts on a ridge run. But I’ve never been as proper f*cked as the time I almost got the chop atop one of the deadliest mountains in America. 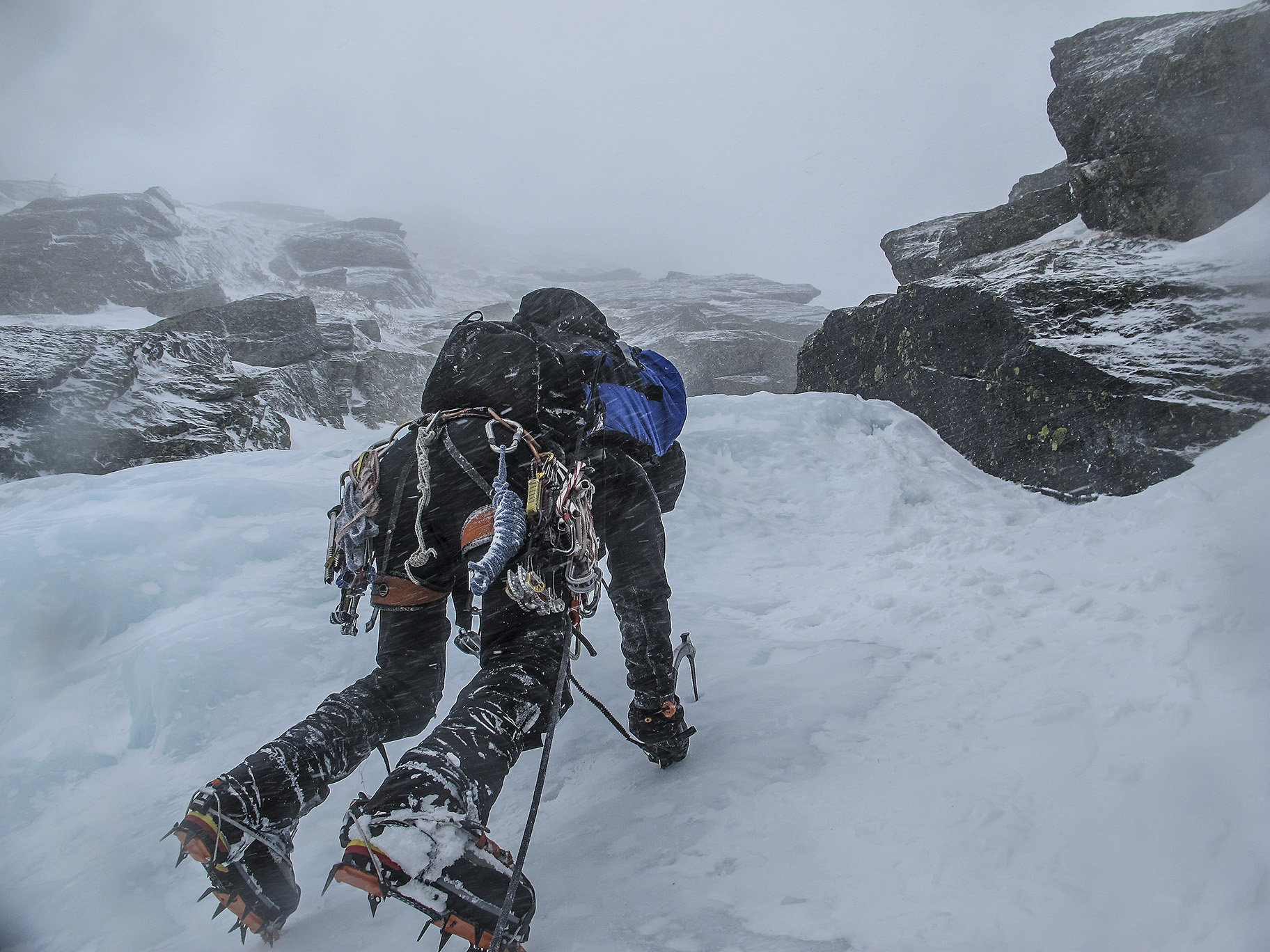 What kept me (and my loving climbing partner) alive that day wasn’t primo gear, some flashy firestarter kit or a SPOT beacon. Rather it was what I consider to be every survivor’s most important tool – my brain. Which, when things get a bit dodgy in the alpine, is one of the first things to declare mutiny on the situation. The following I’ve learned and learned to adhere to, kinda like instrument-only avian navigation when in the clouds: trust them, and stick to them, even when it seems like you are flying upside down.

Stick to the Plan

We were lost. Really lost, and we had been that way for a while. It’d been a hell of a day thus far: long approach, unstable avalanche conditions, and over 1000 feet of technical ice climbing. Whiteout conditions would come and go, and the mercury was on its way to somewhere below 0 Fahrenheit. It was snowing, getting dark, and according to the reports we read the next day (spoiler alert: we lived) the winds were steady at 60 mph, and gusting at 100. And according to anyone who lives on the US coast, it was a hurricane. Surface conditions were a mix of breakable crust and alpine rock – facing strong winds while trying to balance crampon points on ice and stone was like trying to walk on tennis balls on a frozen lake. Did I mention we were lost?

For the first time in my climbing career I was truly scared – the kind of fear where Death walks in the door without an invite. Yes, yes, I know, I have been known to go ropeless on occasion. Free-soloing is a bit different: Death sits above your shoulder the entire time, and by constant awareness of and respecting Death the situation is manageable. Lost in a whiteout, my mind redlining with variables, the frustration of being lost, and being constantly blown to my knees, my brain was struggling to determine if we’d survive the night with what limited gear we had, let alone manage our situation.

I had a faint idea of where we were, or at least where we had just come from, after topping out the quarter-mile ice flow. However once whiteout conditions set in, we lost much of our frame of navigation. I also had a good sense of the direction we were heading, and although I often second-guessed myself, I forced myself to keep heading in that direction. At times it got bad, but by not wasting valuable time on backtracking, it allowed us to cover more ground, one 70m rope-length at a time.

Sticking to even a bad plan is better than backtracking in most situations, and gets you in motion, which is closer to safety than just hanging around. And failing to decide in these conditions is certain death.

A good climbing partner calls it his “mountain sense.” Blurring the line between subconscious and conscious, it’s a form of calculation that develops over a climber’s tenure in the hills. That day, while lost and in unfamiliar terrain, I kept being drawn a certain direction, based on a feeling I had. I’d catch bits of the horizon, and eventually after about 45 minutes of blind stumbling we came to a snow gully near a depression. I caught a sharp feeling that we were headed the right way, based on a hazy memory I had of being up near that part of the mountain in summer, years before. Everything was completely different, all I was going by was a change in gradient and a snow-choked gully that would appear completely different in summer months. But it felt right – and we pushed on, even though that direction was trending off our current path.

I remember reading first-hand perspective article about a hostage situation. The hostage was faced with a gunfight, being attacked, and ultimately captured. One thing he mentioned about helping navigate the chaos was being vigilant about time. When chaos happens time seems to alter speed. “It all happened so fast,” or “it seemed like everything was in slow motion” are common reports from survivors. One thing I did that day was keep a good eye on the clock, which helped me gauge how far we had traveled and how long we had until dark. As the minutes wore on, I kept a mental log of where we had been when, and things were starting to look familiar. Out of the white I noticed a speck of color, and an abnormally flat expanse of snow, one that was out of place in this terrain. It turned out to be a wand marking an access trail for the weather observatory at the summit, and a CAT road that ultimately connected to the auto road leading down the mountain.

When your brain is trying to stay afloat in floods of cortisol, adrenaline, and a toxic soup of other stress hormones, you have to do all you can to consciously help out with memory formation. The Native Americans would create songs to help memorize their paths while walking – I tend to do something similar when heading off-trail. Standout landmarks like skull-shaped boulders, troll-clusters of trees, and windows or arches in rocks are all great characters that can help you remember your way.

According to a post on my Instagram feed, another climber fell to his death that day down a ravine in the whiteout.

I was recently retelling this story, and was asked why climbers/adventurers/outdoorspeople endure these conditions and the associated risks. For me, it’s nothing do with adrenaline rushes or media fame, sponsorships or firing the Alpha genes.Rather it’s an opportunity to willingly put myself in a situation that will test my physical, emotional, and mental bounds, and expand those boundaries as experience happens. Sure at times they will be pushed beyond their limits, but the reward is as simple as it is overwhelming: an appreciation for our time here and a sense of priority, a true taste of life, of being alive, that is all too often taken for granted.