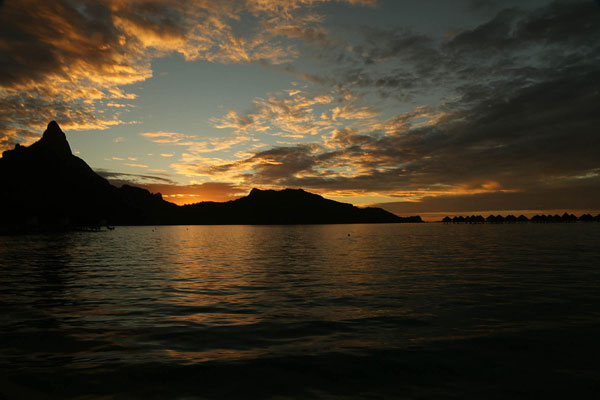 It’s pretty infrequent I put together a trip report that doesn’t involve adventure sports, and despite all best efforts this write-up will be a rare exception. For even the raddest among our large collective of adventurers needs a beach holiday (sans 19-foot crushing surf) once in a while.

There are some who may assume a trip like this would be on the starched coat-tails of my impending nuptials, however those who know me well enough know my better half wouldn’t allow a long vacation that didn’t involve the phrase “on belay!” Rather, I got the unfortunate assignment to based out of the South Pacific, my office complete with all the trappings of your standard above-water bungalow, obligatory and resplendent glass bottom floor included.

And although technically if you hack the word “paradise” into the google-machine Bora Bora is among the first entries, it wasn’t without challenges for the traveling photographer. And not just the challenge of “which coconut shall I drink today,” or the daily headscratcher of “from what side of my bungalow should I launch myself into the crystalline waters of the South Pacific this morning?” But before I set sail into the challenges of working in an island paradise, I’ll offer some insight to this honeymoon paradise of the South Pacific.

While it’s known for amazing beaches and great surf, at its interior Tahiti has a lush and wild heart. A little legwork will get you far from the maddening honeymoon crowds, high on Mai Tais and demolition-derbying SUP boards and waverunners, onto desolate mountaintops (7000ft/2000m), emerald valleys, and untouched adventure. Think canyoneering, but instead of the typical desert slots you’re descending lava tubes.

Culturally the Tahitians are an interesting sort. Typical of island nations they are less driven by the clock as are western nations, and as a sustenance civilization they exude a grateful mentality for all that has been provided. The lush and nitrogen-rich soils (the entire archipelago a volcano graveyard) provide ample growing opportunities for fresh fruits and vegetables – the most famous being Captain Cook’s storied breadfruit as the catalyst for the Mutiny on the Bounty. Which the locals treat as the Irish do their potatoes – prepared a thousand ways, and pretty similar in taste/texture. I’ve heard them described as tasting a cross between a chestnut and a banana – if you want the experience just toss the two into a VitaMix and drink up. As well as the land bounty, the sea provides an overabundance of fresh fish, with fresh line-caught tuna steaks for sale roadside for about 7 bucks US.

Land ownership is one of heritage, and it is common to see large parcels with multiple homes for extended families. Land is not sold or bought, rather deeded down to future generations. Each member of the compound has his or her responsibilities to contribute, guided by the family elders. Unlike the elders here, which are neatly packaged away into retirement homes. As with many extended global civilizations, unfortunately imperialism left it’s ugly mark on this distinct culture – with most of the country’s storied religious heritage overpowered by modern beliefs, as noted by the abandoned worship grounds and hillsides dotted with overflowing catholic churches.

It’s the biggest island in the archipelago, Tahiti’s coast replete with highways and McDonalds, and after a few days exploring I headed off to my assignment destination: Bora Bora.

Once airbone, anticipation grows as does the ever blue-ening water, as air miles shrink between Tahiti’s Papeete airport and the strip of asphalt on an otherwise-empty motu adjacent to Bora Bora. With only 19 miles (32k) of paved road, the island isn’t big enough for an airstrip, and upon landing you’re water-taxied over to the reef.

For the geology buffs, Bora Bora is on the slow road to becoming an atoll, and as of its current place in the epochal timeline is now an extinct volcano (2385ft/727m) encircled by a barrier reef. The space between is simply called “the lagoon,” a tranquil and serene beacon for sea life (turtles, rays, sharks, tropical fish) and land life (tourists) worldwide.

Most hotels are on the surrounding barrier reef, and are as self-contained as your average Vegas casino. All inclusive, the overwater bungalows stretch like tendrils into the lagoon interior, with travel discouraged to the outer reef’s ocean side. Tales of wild dog packs, less-than-hospitable locals protecting private land, and large waves are designed to keep travelers at bay – but to me they seemed just that. I hiked for miles down a desolate coast, exploring tidal pools, a hard coral coastline, and digging through mountains of shells and centuries of ocean flotsam and jetsam. I’m not endorsing breaking the rules and risking being swept away to sea, but from what I hear coastline along these islands is legally in possession of the people – it cannot be privatized.

The island’s nucleus is Mount Otemanu, which I’m told has never had a flag planted upon its 2300’ summit. What looks to be 600-700 feet of technical climbing on questionable at best rock guards the top, but lacking climbing gear, a partner, and a severe death wish I passed on soloing to the top.

I did however want to recon the climbing, and did a little research on a hiking trail to where the technical climbing would start. Multiple trip reports warned of unmarked steep trails, trespassing into unfriendly terrain and wild and aggressive dogs, so with 3 hours to make an 8 hour hike and exhausted from a 2-week assignment I naturally attempted it the day of my flight back stateside. At the very least it’d ensure I crashed hard on the Pacific redeye.

With such a short window I abandoned hopes of getting near the vertical terrain, but had hoped at least to get a sense for the rock quality for a future trip. However I burned a bunch of time just finding the trail, as well as dodging the aforementioned dogs (I used every word in my Tahitian/French vocabularies to recruit local help in warding off the canines smelling fresh exotic meat in American shoes), and never escaped the thick rainforest terrain on Otemanu’s flanks.

The few steep sections I encountered, with fixed ropes so bad I was happier pulling on dirt hummock sloper holds and tree roots, revealed better rock quality than expected and hopes for a future first ascent.

I did have the sense to pack a Mountainsmith TrekkerFX, which served both as a needed aid for the steep wet hillside and a weapon to keep the dogs at bay. The collapsible trekking pole was great to aid through steep overgrown hillside, and the shock-absorbing function kept me stable as I rushed back to sea level to catch my water taxi. Not to mention the hidden ¼-20 screw in the handle to transform it from a trekking pole into a monopod for my 400mm lens.

As with anything so close to the equator, light was a big issue on Bora Bora. Sunrises and sunsets are short due to the latitude, and much of the day is spent baking under high sun: harsh shadows and borderline unmanageable dynamic range. However one saving grace was unreal saturation of the water, which when coupled with a polarizer made for some incredible water shots. In some areas I had to zoom out and show shoreline in the frame, lest the water be mistaken a swimming-pool.

As for sunset light, a good trick for those fiery landscapes when the sun is low on the horizon is to overpower your camera’s white balance, pushing deep into the higher Kelvin range. As long as there are no skin-tones or otherwise color-dependent subjects, 12000K can yield some pretty otherworldly sunsets.

While Andy Mann is our resident underwater expert, I’ll offer a few basic tips for the underwater shooter. For those using simpler underwater cameras (GoPro, point-and-shoot), try to stay close to the surface to take advantage of natural light – color wavelength falls off closer to the surface (warm tones first). Flash photography helps this, but the typical-built in models get hung up on backscatter (reflection of particles) into the lens. If this is your setup and you’re using on-camera flash, try and remain still as to not stir the water, especially in shallow water.

Regardless of the rig, be sure to get close to your subject. I was shooting with an Ikelite housing/dome port for my Canon, and with a 17mm lens had to be nearly touching the subject to get a good frame. I supplemented light with 2 articulating flash arms, changing the incident angle of the light making for a clear frame (no particle reflection).

Not only is a larger underwater rig good for balance, it is reassuring to have it between me and any sharks passing by who might be in the mood for lean meat.

My departing run-in with the dogs was enough to fray the remainder of my nerves, and after a few weeks I was ready to make my return to the states, and to safely drinking from showerheads. It wasn’t hard to acclimate to a morning boat commute each morning and bidding goodnight to the southern cross in the sky, not to mention the fresh food and local hospitality. But even paradise can grow wearisome when eclipsed by homesickness, not to mention the metric ton of Tahitian vanilla and black pearls I was smuggling home for delivery.

Bora Bora From the Lens