Recently, a few friends and I set out to explore an area deep in the Ozark Mountains known as ‘Big Creek”.   This is an area the does not receive many visitors due to the remoteness, steep and rugged terrain and lack of any trails.   The 8 inches of fresh snow and cold temperatures also provided some extra challenges and forced us to carry more gear than normal, which made me a bit nervous since I was utilizing my Mountainsmith Mystic 65 backpack for the first time. 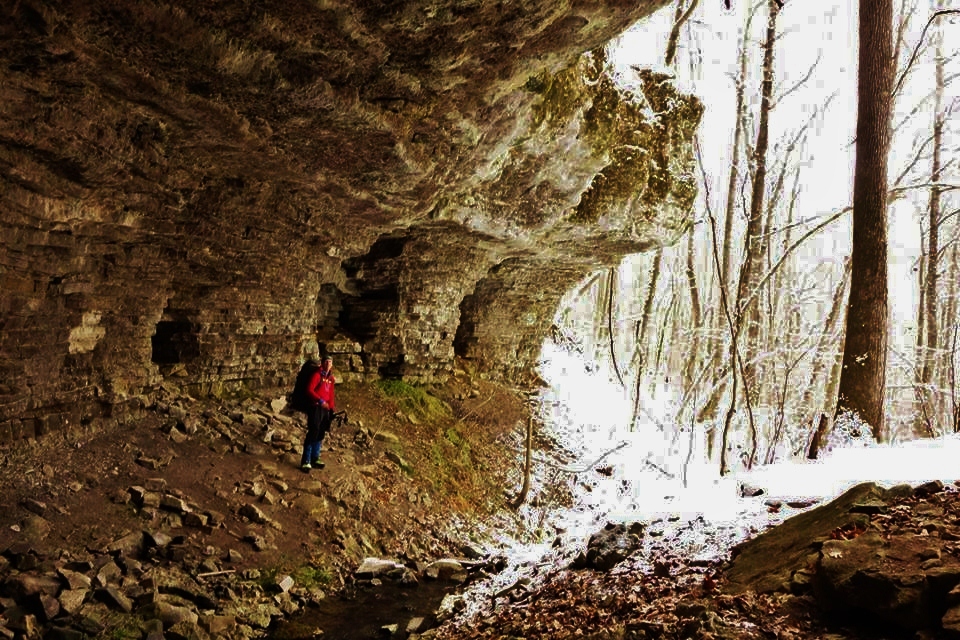 Fortunately, after two days exploring the mountains, bluffs, caves and waterfalls in the area, the Mystic proved to be very comfortable and able to handle loads in the 40 to 50 pound range easily.  As our trip grew to the end, I packed up my gear in my Mountainsmith backpack and together we made the several hour trip back to our vehicles.

Unfortunately, the previous night that we spent in the wild had brought new snow and ice that resulted in even tougher conditions than when we arrived; it took us only a few hundred yards of travel in our four wheel drive vehicles to realize we would not be able to negotiate the steep and narrow mountain road out of the canyon and over the mountain. With some difficulty, we managed to turn around and made the short trip back down to the bottom of the canyon where we decided to follow the unknown road through the canyon in hopes that it might provide us another way out. It was really the only way to go.

There were no vehicle tracks and no signs of human habitation as we proceeded down the road, leaving us quite unsettled. After navigating several miles, we finally came across an old cabin near the creek at the base of a huge mountain. Smoke wafted from the chimney, indicating habitation that we wanted to take advantage of – someone living all the way out here would surely be able to give us directions! 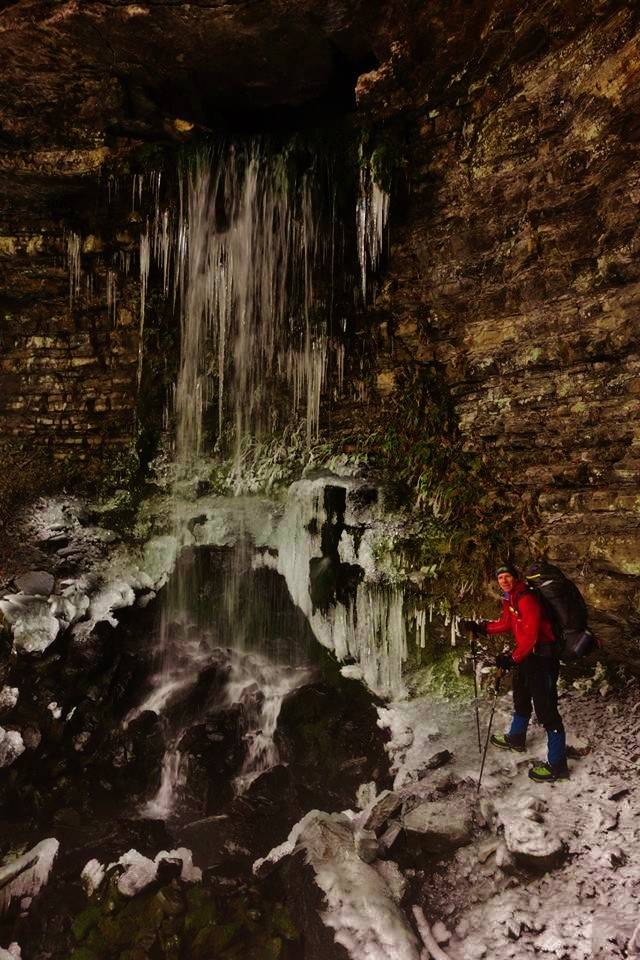 As we approached the cabin via the short but rugged road leading to it, I was reminded of images in movies: the chimney smoke blew in the stiff winds, the weather-worn sides of the cabin were tattered in areas, the front overhanging porch contained a small wood pile, and the large stump in the front yard had numerous pieces of bark and firewood lying in the snow around it.  Behind the cabin, I noticed the large rock outcroppings reaching out from the side of the mountain, surrounded by beautiful and fragrant pine trees, their needles coated in the glistening snow.

While the rest of my party stayed in the two vehicles, I walked up towards the front porch when two dogs from behind the woodpile began barking. The plywood front door creaked open and a thin male in his 40s, wearing pants that were too large and a ripped and stained flannel shirt, appeared in the doorway. He asked what I wanted. I immediately held my hands out to my side, so he could see I was not a threat and quietly explained that we could not get over the mountain due to the snow and was hoping he could help me with some directions. He immediately commented about the size of the mountains around the canyon and how all the snow can make things impassable.  Not knowing what to expect, I was nervous and relieved, when he invited me inside.

As I entered the small cabin, I could see a couch against the far east wall of the living room, a table with two chairs in the far west side of the room and in the middle a wood stove, with a mattress on the floor heaped with blankets. The mattress was positioned on one side of the woodstove and, on the other, stood two, large 5-gallon buckets of water. I could also see a lantern, some camp fuel, some pots and several other items around the room.  There appeared to be an entry or hallway to the back part of the cabin before me, but a wool blanket blocked the view forward.

As I repeated our dilemma to the man, my mind turned to the position of the mattress and buckets. I surmised that someone had been sleeping on the mattress next to the wood stove for warmth and the water was for drinking and cooking, that it had been most likely gathered from the creek that ran in front of the house and kept near the fire so it would not freeze. There was no sign of electricity, running water, television, Internet or any other modern conveniences. Through the window to the east behind the couch I could see an outhouse. 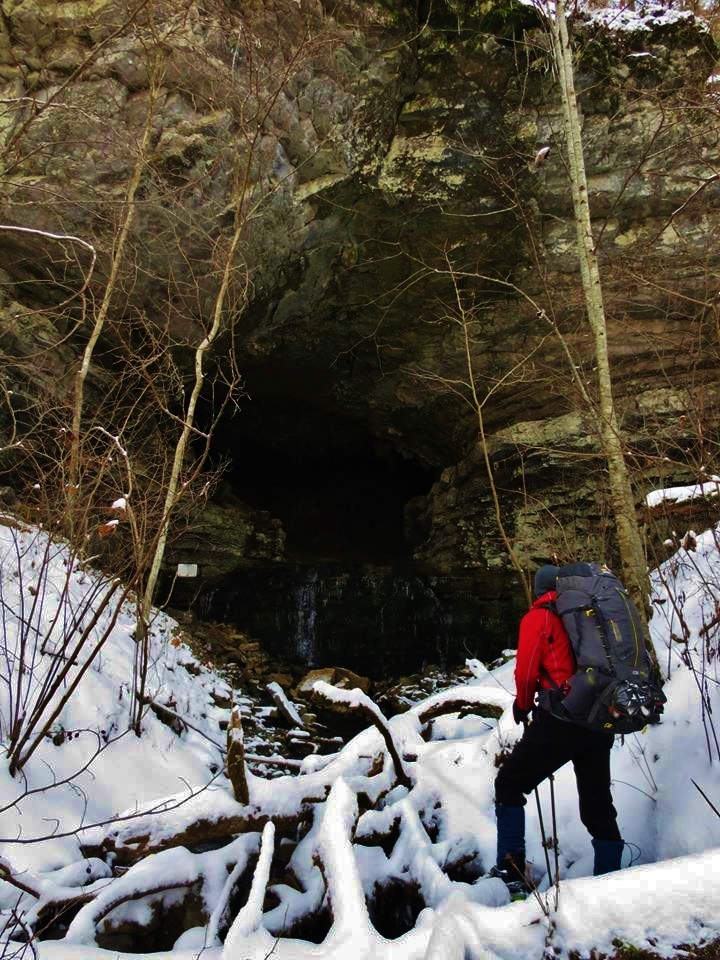 The friendly resident explained to me that if I continued east on the road, I would eventually come to a “T” intersection and that I should stay to the right (pointing out that if I went left, the terrain would become very steep again as it would cross another mountain pass). Staying right would allow a four-wheel drive vehicle to make it out of the canyon. Only after the directions did the man introduce himself as “Mike.” He said he lived in this home with his girlfriend and his two dogs.  My mind immediately went to the Hank Williams Jr. song, “A Country Boy Can Survive.”

Mike explained that he loved those mountains and while it was sometimes tough, he liked the peace and quiet, the wildlife and being responsible only to himself.  But it was more than that – he said he felt he was part of those mountains. As Mike spoke, I could see the admiration in his eyes and almost felt the sense of peace in his heart.  Mike then changed the subject and said, “You boys must have been cold last night since it was around zero. How about a snort”? Mike then reached over and removed one of the two large mouthed mason jars that contained a clear liquid that had been sitting on the table. Mike then opened the jar and handed it to me. I could smell the strong odor of alcohol and knew it had to be moonshine. Not wanting to offend Mike, I took a very small sip, which felt like I was drinking liquid fire as I tried to swallow it.

Mike started to laugh as he noticed the funny look on my face and acknowledged that “It had a bit of a kick to it” as he took a big drink. Mike then told me that he does not get many visitors and that I was always welcome to stop by if we were ever found ourselves this far out in the mountains again. He then reached over and shook my hand as I thanked him for his courtesy.  I exited the cabin and walked back to my truck, where my friends were anxiously awaiting my return.

As I left and relayed the story to my friends, I could not help but think about Mike.  While he was living a life that had to be hard at times, he seemed so at peace and so happy, which he displayed with his big smile, even though he was missing most of his teeth.  Mike seemed so content just living in the mountains, living off the land, living by his own rules.  Mike had all he needed, and it did not include television, a cell phone, Internet or even a bathroom.  As I got further away from the cabin, it seemed clear that Mike had found something in these mountains that many of us never find.

Dan Nash is a guest blogger for the Mountainsmith Blog.  He guides for Satori Adventures & Expeditions out of Nixa, Missouri.