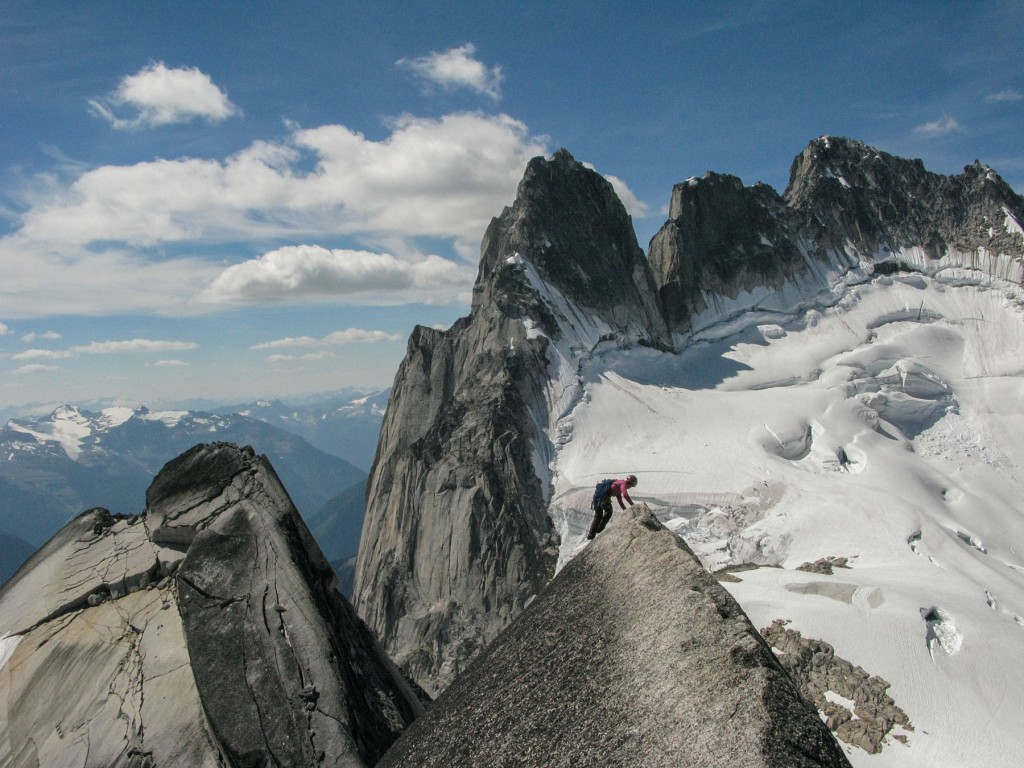 The Bugaboos. A range nestled deep within the tectonic folds of British Columbia that for climbers calls to mind images of endless ridges and clean alpine granite; an otherworldly setting of spires and towers, glaciers, and alpine pools so blue you question your former understanding of the color.

The road begins at the road’s end, a dirt pullout 30 or so miles from pavement where cars are crudely-wrapped with chicken wire to prevent rodents from making an easy meal of brake lines and tires. Apparently the local critter population has developed an appetite for rubber, although I had my doubts the sticks and rocks were enough to deter their crafty little brains. In any event we fortressed the car the best we could, sorted our gear, and began the intimidating hike up to the distant peaks.

A steep vertical profile guards base camp, about 3000-feet of vertical gain over 2 or so miles. A solid undertaking made even more solid with a week’s worth of camping and climbing gear on our backs: tent, barely enough food, climbing ropes (2), climbing rack, stove, fuel, a mess kit, parkas, sleeping bags, sleeping pads, first aid kit, water, extra clothing, a multitude of hats, climbing guide, camera gear, two ice axes (one technical and one mountaineering), approach shoes, sandals for rest days, powdered espresso, climbing shoes, harnesses, chalk bags, crampons, a book of matches, what felt like 20 lbs of powerbars, and a brick of medical terminology flashcards that my partner needed to memorize for her upcoming semester and insisted on carrying. Don’t they make an app for that?

It felt like nearly a metric ton each, our packs were bulging as if we robbed an outdoors store. This trip was my first with the Mystic 65 pack, which I was pretty stoked to give a go. If anything can get you excited about a grueling climb it’s shiny new gear, and the Mountainsmith pack had me charged to go. 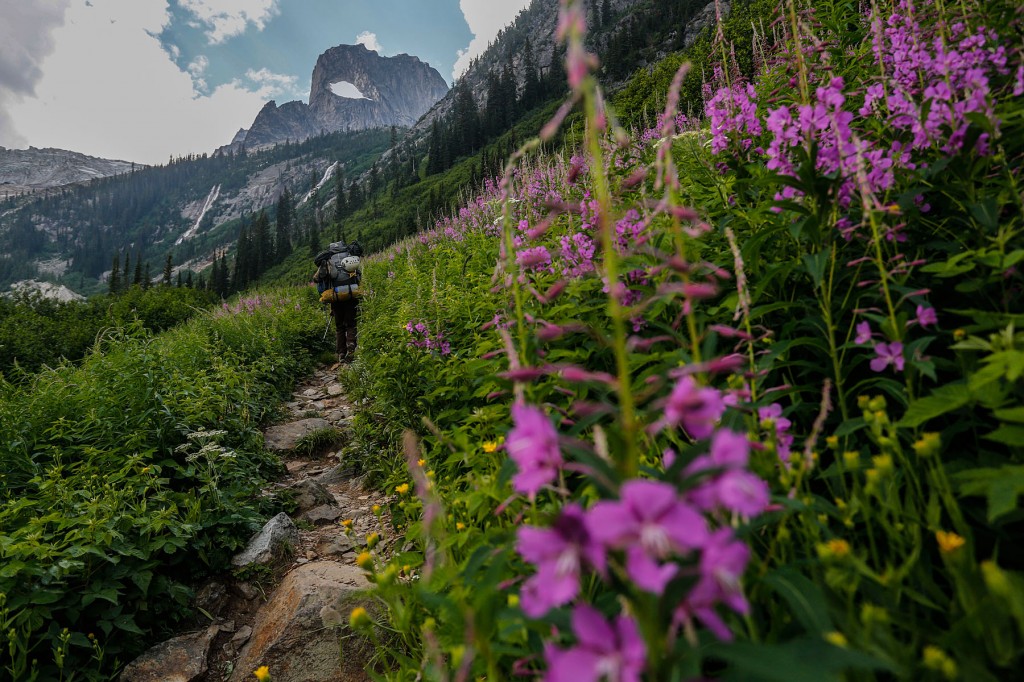 Right out of the gate I felt a difference in how the pack fell on my shoulders, with a solid load distribution on reinforced straps. To be honest, looking at the pack I expected the comfort it offered, but the stability was borderline revolutionary. Mountainsmith did an incredible job marrying the breezeway between pack and back with a stable carry – which came in handy when things got steep. Like ladders bolted to rock face steep. Like fifth-class moves with snowy boots over spine-fracturing terrain steep.

With most things I prefer simplicity (I’ve been told I have “perfected the art of minimalist living”), but when it comes to gear packs I am admittedly enamored with carry-systems. The Mystic’s essentials pocket made it easy for my partner to get to things like my wind shell and bars quickly, and without me having to squat and stand every time I needed her to reach the pack topper. We also put good use to the ice-axe loops and bottom straps, which were perfect for the tent, making for a balanced load. Nearly nothing was superfluous on this rig, keeping it light and effective – the baseline of mountain travel.

Four sweaty uphill hours later and we were at basecamp, exhausted but charged for a week of the stuff our dreams were made of. 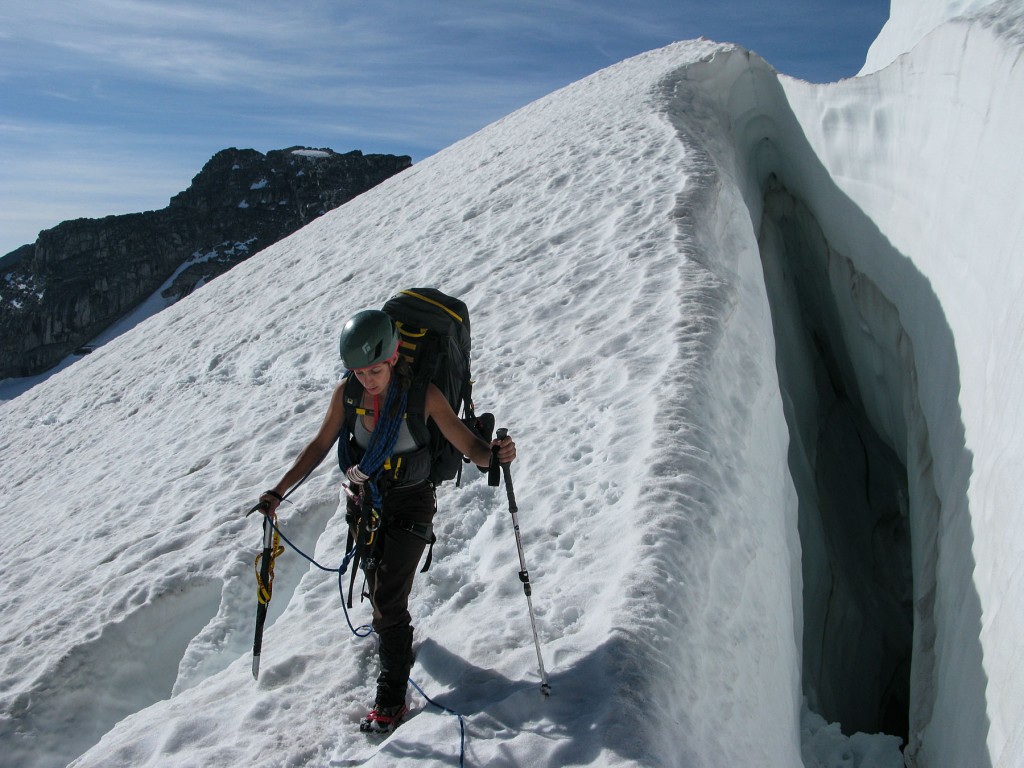 Situated atop a granite dome at 8000-feet, Applebee Camp is a far cry from the Himalaya but nonetheless it took a few days for us flatlanders to adapt. Short of un-retiring the Diamox from my 2012 Nepal expedition, I had to lean on breathing techniques to take my mind off of being winded for things that at sea-level I wouldn’t give two thoughts.

For this trip we had big plans, but as always the mountains had plans of their own; warm conditions created dangerous passage through one of the cols, resulting in a handful of serious accidents in recent weeks. Just prior to our arrival we got word a woman took a big fall into a crevasse, resulting in a fractured pelvis and an airborne shortcut home. In camp we overheard another climber talking of her partner’s accident, he was hit by rockfall and seriously injured in the shooting gallery the col became with the warm temps.

The situation was favoring luck rather than skill, which is a part of the mountaineering game I am loathe to play. I’d rather be shut down technically on my own terms rather than luck my way to the summit – life is far more fragile than the ego banquet awaiting atop a pile of crumbling rock and snow.

So, we improvised. We attempted a secondary route avoiding the col, an alpine start with full packs, despite time and routefinding towering against us. Even though it was a long shot we’d be able to make the carry and get in our objective, the words I heard mountaineering legend Conrad Anker speak resounded in my head: “don’t be so quick to give up when things look like sh*t.” We suffered our way up a remote glacier, roped together through crevassed terrain, gaining another couple thousand feet above basecamp. Nearing the base of our route, we decided it was too close to call, and instead decided to drop all the gear and pick a low-hanging plum of the Bugaboos, the West Ridge of Pigeon Spire.

Although only 5.4, this clean line offers world-class exposure thousands of feet above glaciers, and cut loose of our packs we remembered what drew us to climbing in the first place: we had fun. Unencumbered we soloed up the 1500 foot line, free of the gear and stress required of bigger objectives. Our moves weren’t suddenly about difficulty or pushing limits, and our minds weren’t all wrapped around fiddling in gear or setting belays.

If I’ve learned anything in the mountains it is the importance of flexibility and the value of improvisation, from big walls in Yosemite to big peaks in the world’s great range. Part of the mountaineering game is being shut down, and being okay with it – taking from all experiences a lesson, and adding that to your arsenal the next go round.

Sure we climbed much harder routes on this trip, with more technically-demanding moves that would be more at home in the climbing mags and internet forums, but climbing simply for the pleasure of movement and expression grounded us and was perhaps for me the most memorable part of the trip.

The Bugs will always be there, spires, towers, and ridges awaiting, and we’ll certainly be back, stronger and wiser. 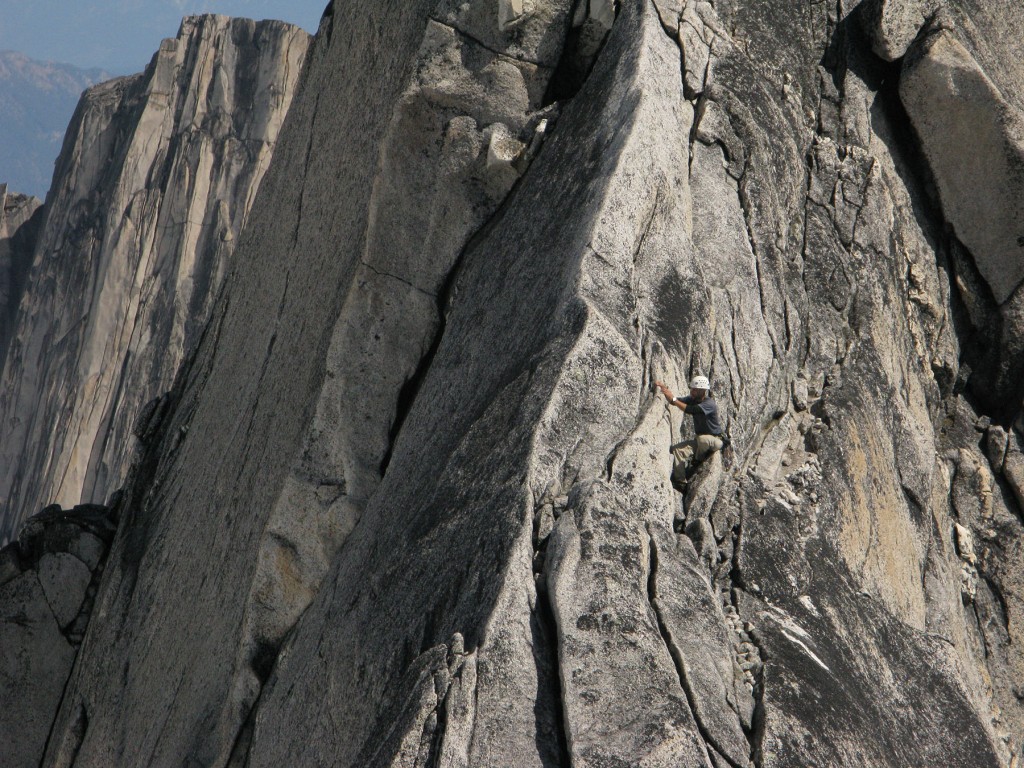 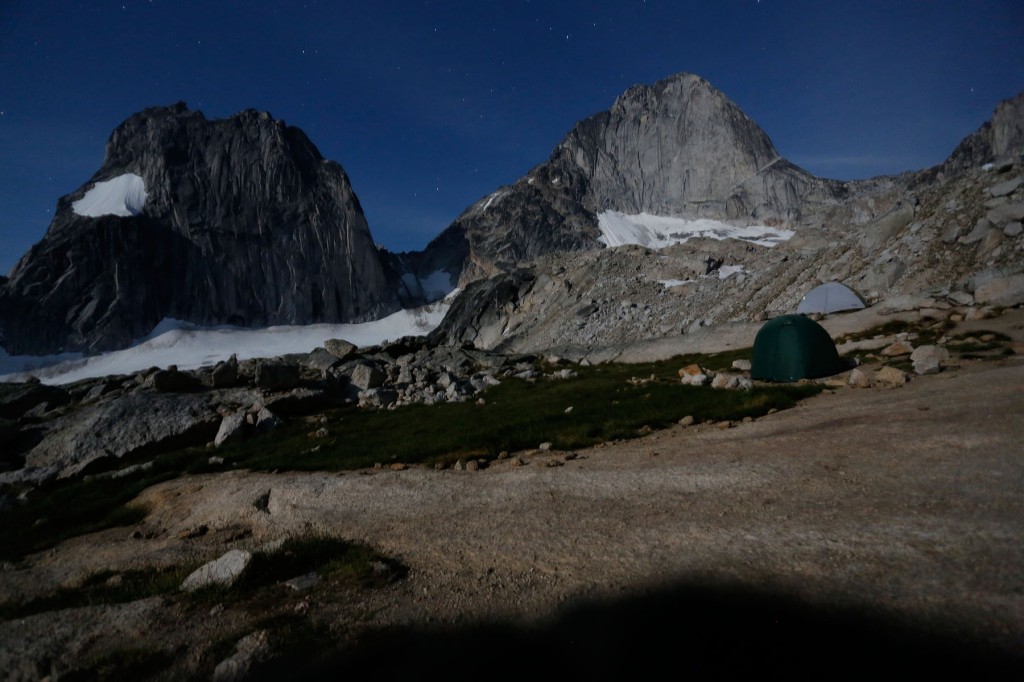 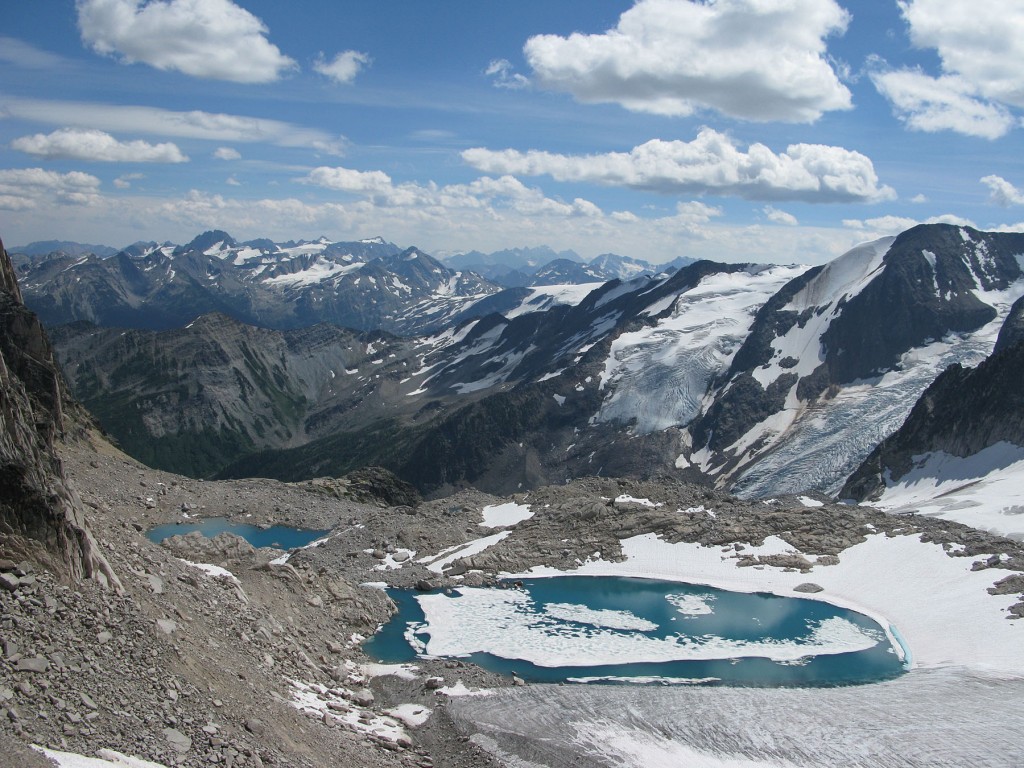 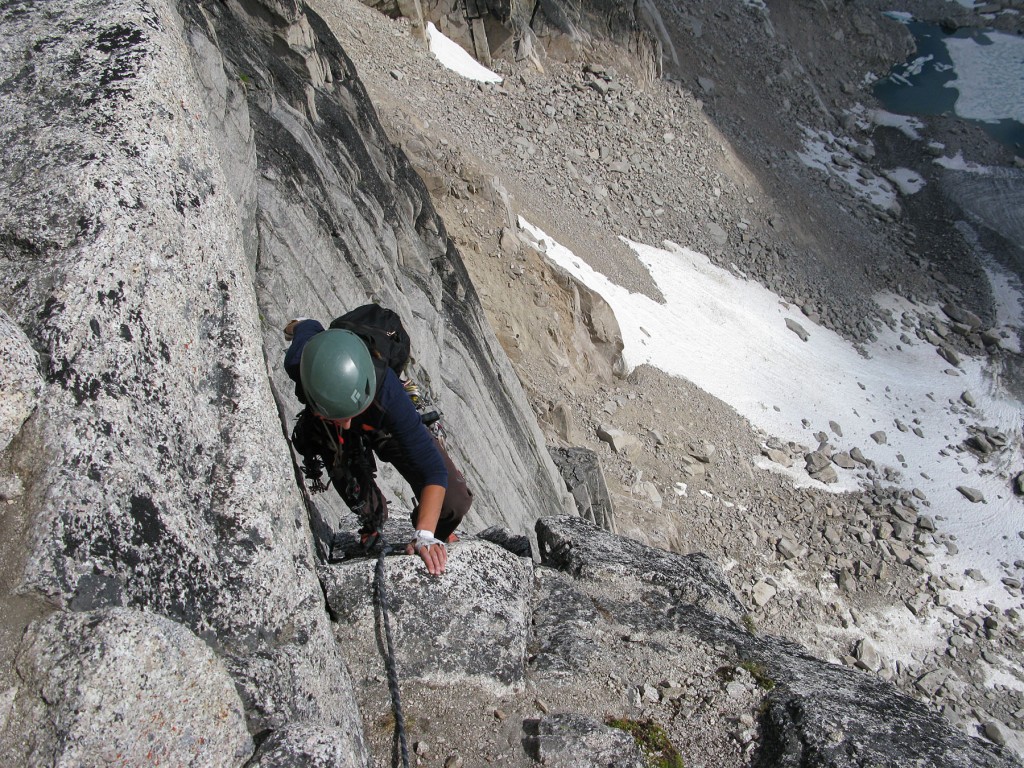 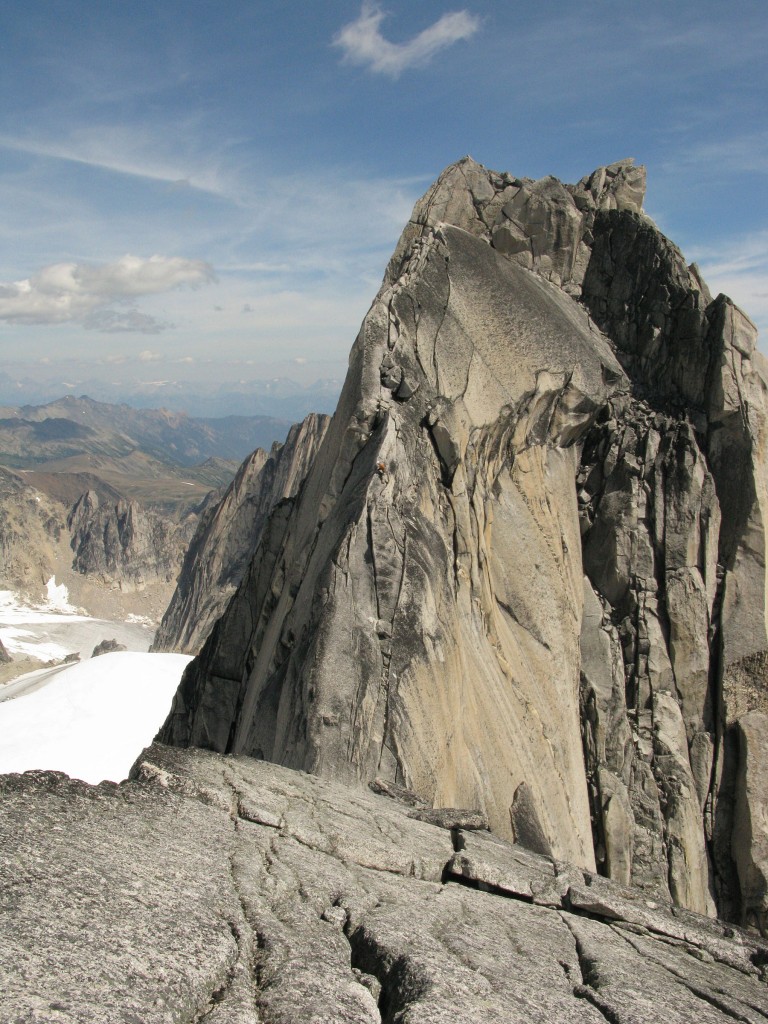