Once again, Mountainsmith has used its backpack-selling strategy to raise thousands of dollars for the American Alpine Club at this summer’s Outdoor Retailer Show in Salt Lake City.  This donation, along with others throughout the year helped Mountainsmith to achieve the $10,000 Patron Sponsorship level for the first time ever in 2014. “We are thrilled to support the club at such a high level this year,” says Mountainsmith president Jay Getzel, “we are proud to fund a club that makes it easier for our customers to access the outdoors on an everyday basis.” The brand sees the partnership as a way to sustain the outdoor industry, by making it easier for outdoor enthusiasts to keep doing what they love to do.

Even greater than being supporting partners of the American Alpine Club, it is great to be neighbors of the club as their offices are just down the road from the American Mountaineering Center. For that reason, we are able to hold our meetings in some of Colorado’s most wonderful places(mountaintops and breweries…).

For this year’s planning session, 4 members of the AAC crew joined Mountainsmith’s president Jay Getzel and marketing manager Jeremy Dodge on a hike to the summit of Mt. Bierstadt and cross the Sawtooth Ridge. A 5am start had the crew arriving at the top of Bierstadt by 8, with sites set on crossing the ridge towards Mt. Evans.  For those of you who have not crossed the Sawtooth, it is a humbling and slightly frightening view from the top of Biesrstadt. Don’t let this scare you off though. In reality, the trail is a relatively easy traverse with some slightly exposed sections.

Somewhere along the ridge line it was decided, that the 4th annual Backpacks and Brews party to benefit the AAC should happen once again in the Mountainsmith booth at the 2014 summer Outdoor Retailer show. With careful consideration while making moves on some class 3 climbing, it was decided to increase the amount of packs for sale to 300 this year. With confidence from previous years’ parties, Dodge indicated that he was, “sure that we can sell at least 300!”  The brand has increased the number of packs to be sold every year since its inception from 75 packs in 2011, to 150 in 2012, to 250 in 2013, to an unprecedented 300 in 2014. In 2014, the party featured the Scream 25 and Mayhem 35 backpacks, embroidered with the American Alpine Club logo.

The crew finished the hike(among some pesky willow bushes at end of the hike), and went home determined to make this the best party yet.

Party in the Salt Palace

With 300 beers to accompany 300 backpacks. It was not difficult to attract interest from Outdoor Retailer attendees. Even before the packs went on sale at 4:30 on Day 2 of the show, a line stretched all the way around the side of the 50′ long booth. Sold in 3 batches to ensure that everyone had a fair chance to purchase the packs, each bunch of boxes was emptied rapidly, as PBR tall boys wrapped with Mountainsmith coozies were passed around.

Also becoming a tradition, the crew from True Hero Events was on hand to help run the party and hype up the crowd.  With one of their fearless leaders Andy Held on the front desk of the booth, a crowd gathered as he raffled off more gear from Mountainsmith and the AAC. 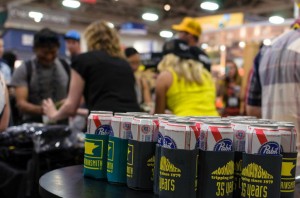 With people still coming to the booth in search of a co-branded AAC/Mountainsmith backpack when the show hall closed at 6:00, all they could be told was, “’til next year.” With the success of the Backpacks and Brews party in 2014, there is no doubt that it will return in 2015.  If you are at next year’s summer OR show, we will see you there; same place, same time.