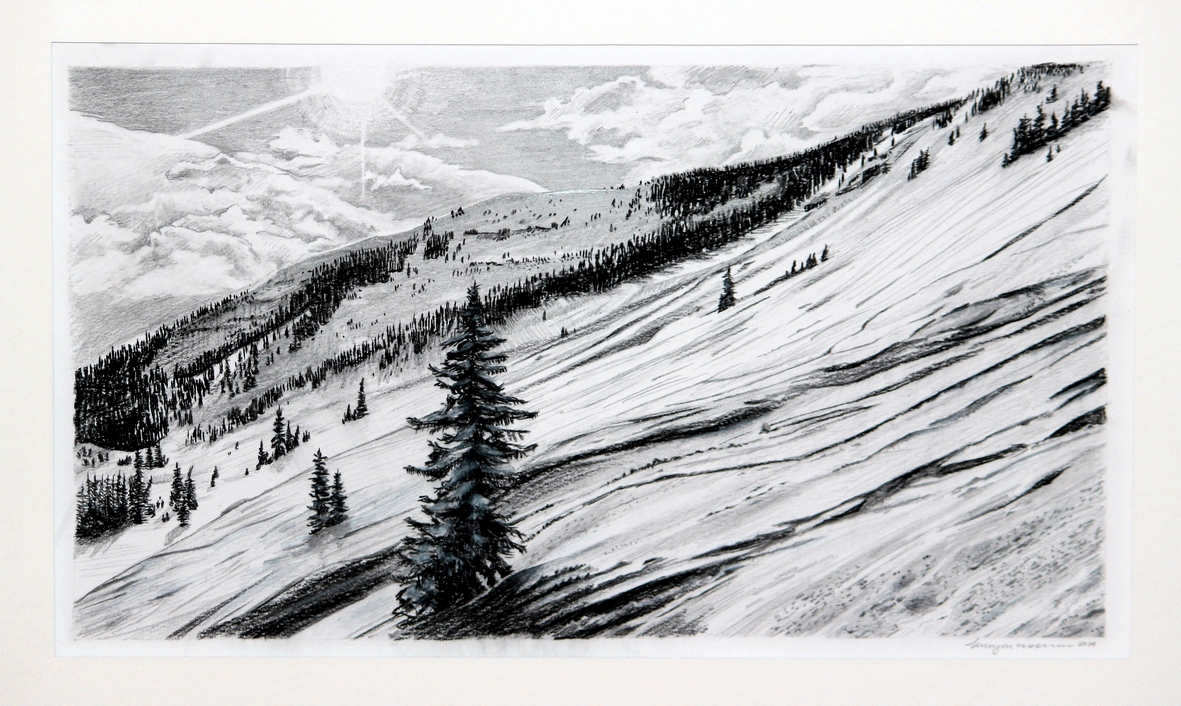 The warmth of the floor vents finally began to cling to my feet. Spring Break 2009, Tarbox and I were sailing down highway 93 battling a classic Colorado upslope flow.

“Tarbox look, I’ve got this friend. Told me there’s this area… in Vail. Where the resort like, hides powder for the locals. And it’s just loaded with tiny dinosaurs and exploding giraffes.”

“Mw, there you freaking go. Let me guess, we’ll also find Vail seeding the clouds so it snows more for the overlords?”

Folks, in these harsh times of global warming, and the warming is all around us. Equally, and of course opposite, we have global cooling. While however hard to fathom, or measure, spectral analysis has confirmed an infestation somewhere close to Vail. Yes, among Vail’s miles of sprawling peaks; hidden in the Far East, there lies an enchanted forest. Freshly stocked with a cesspool of powder, robin hooded from the legendary back bowls and deposited on the Dark Side.

Last April, I was in Vail with my good friend JoMon Keelan, hiking north through Mushroom bowl. Mushroom is a rather flat bowl, but she does have a couple honeysuckle chutes tucked in there. (Including: Photo Chute & The Kitchen {below}) As we slipped into a pillow encrusted meadow, I noticed a wily individual posted above The Kitchen; firing off, what sounded like Sasquatch mating calls, out into the abyss. Of course JoMon and I just had to pull up a chair. 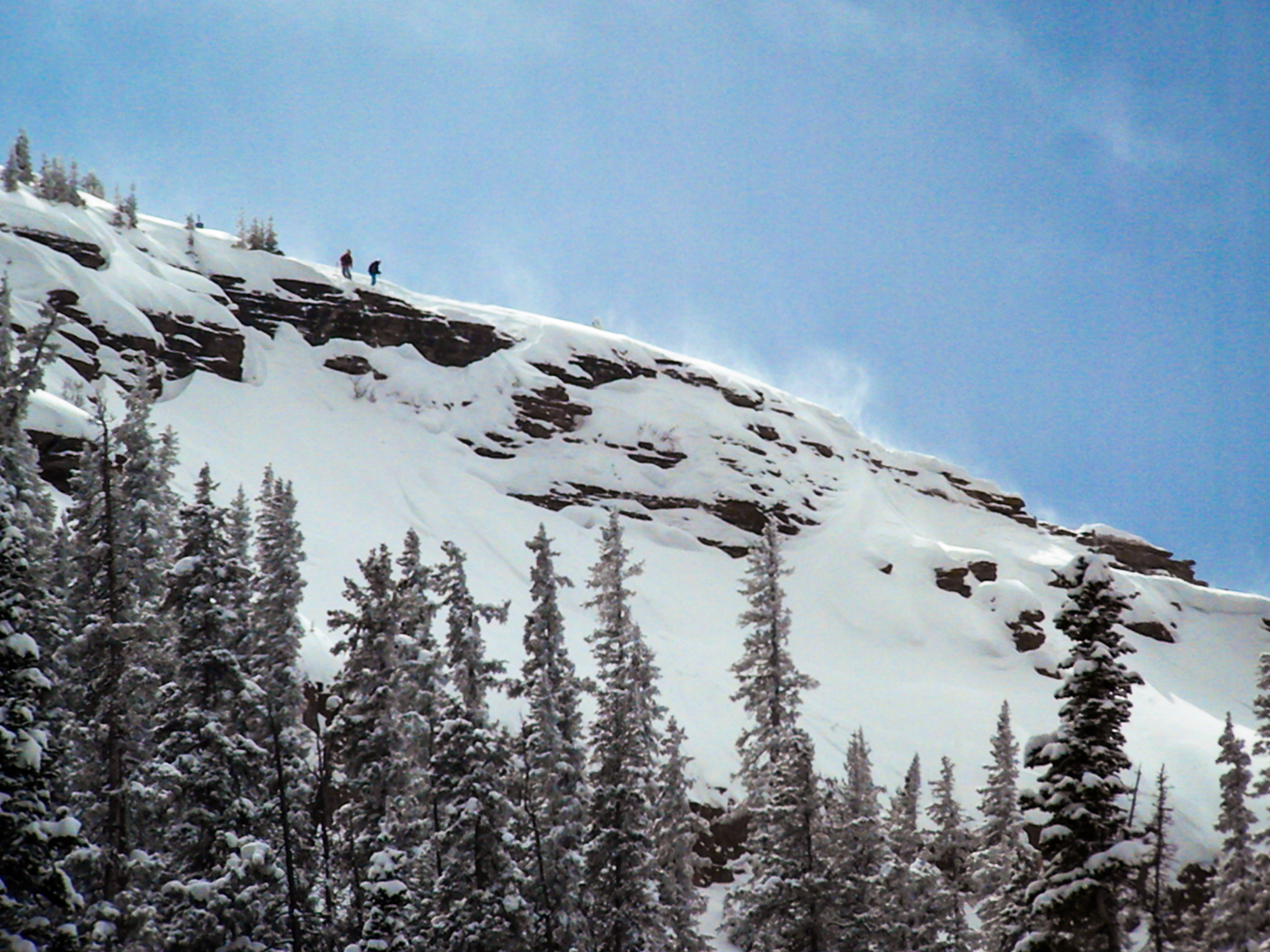 As the last echoes dribbled out of the bowl a disturbing peace settled in. I can still hear his edges taking that first powdery kiss with virgin canvas, frothing aggression up from the valley. He responded by staplin’ a choice back d grab. Then mobbed down, through the evergreens, choking dusty Colorado bam bam, through his hoarders den of scruff.

Just as he was finishing, he saw us; blasting a look I had only seen, when I walked in on my little brothers first kiss. I turned to JoMon, “apparently the grizzlies are out of hibernation.” I was intrigued, I just had to read some of this mans gospel.

Foolishly I lead, “that was a, a pretty nice run there.”

He grunted, shooting a blast of warmth through his throat, melting the remaining crystals. 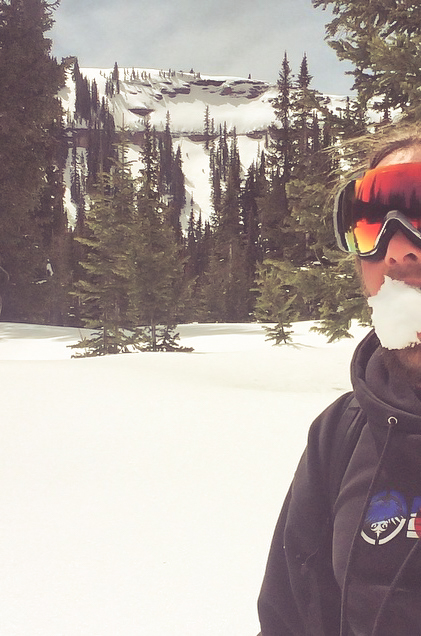 He was a quirky little fella, always calling us “children” or scuttling insults, “attention peasants.” The only compliment I received was a real low blow. “Kid ya ski like you’re in a yuppies wet dream.” I could tell he had contact with society because of the three ages of duct tape on his threads; yet, there was nothing between him and mother but a smile.

Legend has it, the side-country in Vail receives 500″ to 600″ inches during an average season. I would argue: it’s the most consistent out of bounds terrain in America. However, the consistency can lull one into feeling safe. And not a season goes by without a serious accident. January of 2014 we lost a Goliath in Tony Seibert. Reluctantly, I think, D went ahead and gave us the keys to his fluffy nirvana. 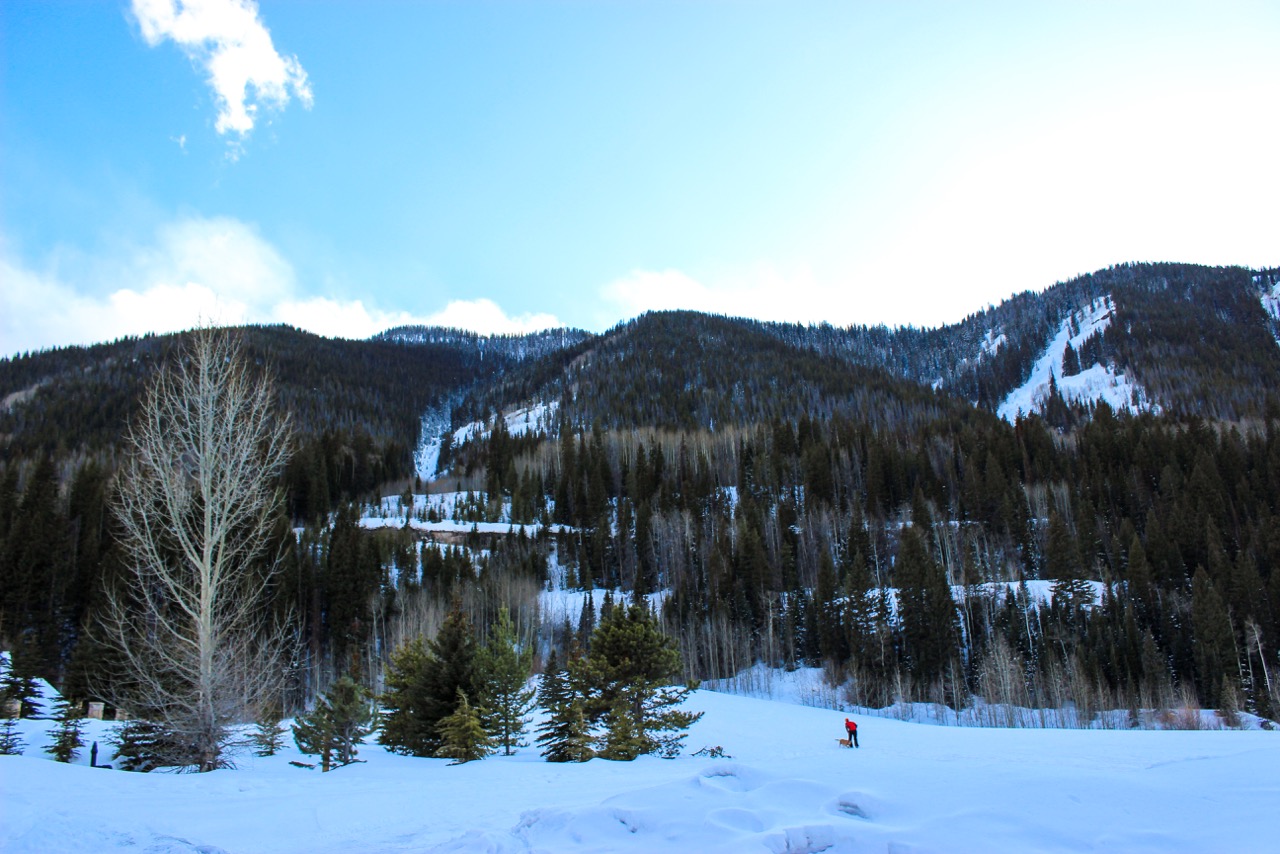 Our newly minted motley crew worked our way towards the top of Mudslide chute, a northeast facing honey hole. As we walked, a midday squall visited the Mush, depositing massive splotchy crystals in the vault. During the spring, as more violent storms whip through the high country, areas like the Vail backcountry are playgrounds for photographers. The combination of threatening clouds and soft late light makes for routine Bob Ross firework displays.

Filming in the backcountry is both mentally and physically demanding. As a photographer you have to be willing to do recon, hike the extra mile, and brave brutal conditions with light gloves. I feel capturing footage is the best way to improve one’s riding, while stashing distinct memories of triumphs and defeats. My conscience is constantly asking questions and I allow that to echo in my photography. When shooting footage I try to focus on capturing the emotion of each moment. Don’t be afraid to fail. Often my best shots are the ones I thought never would’ve worked.

As we pulled into upper Mudslide we were greeted to a players choice backcountry conundrum. D quipped, “welcome to the world of big lines, powder, and air!” His depth escaped me at the time. Yet, the contagious enthusiasm and love for his zone allowed me to embrace the D experience. 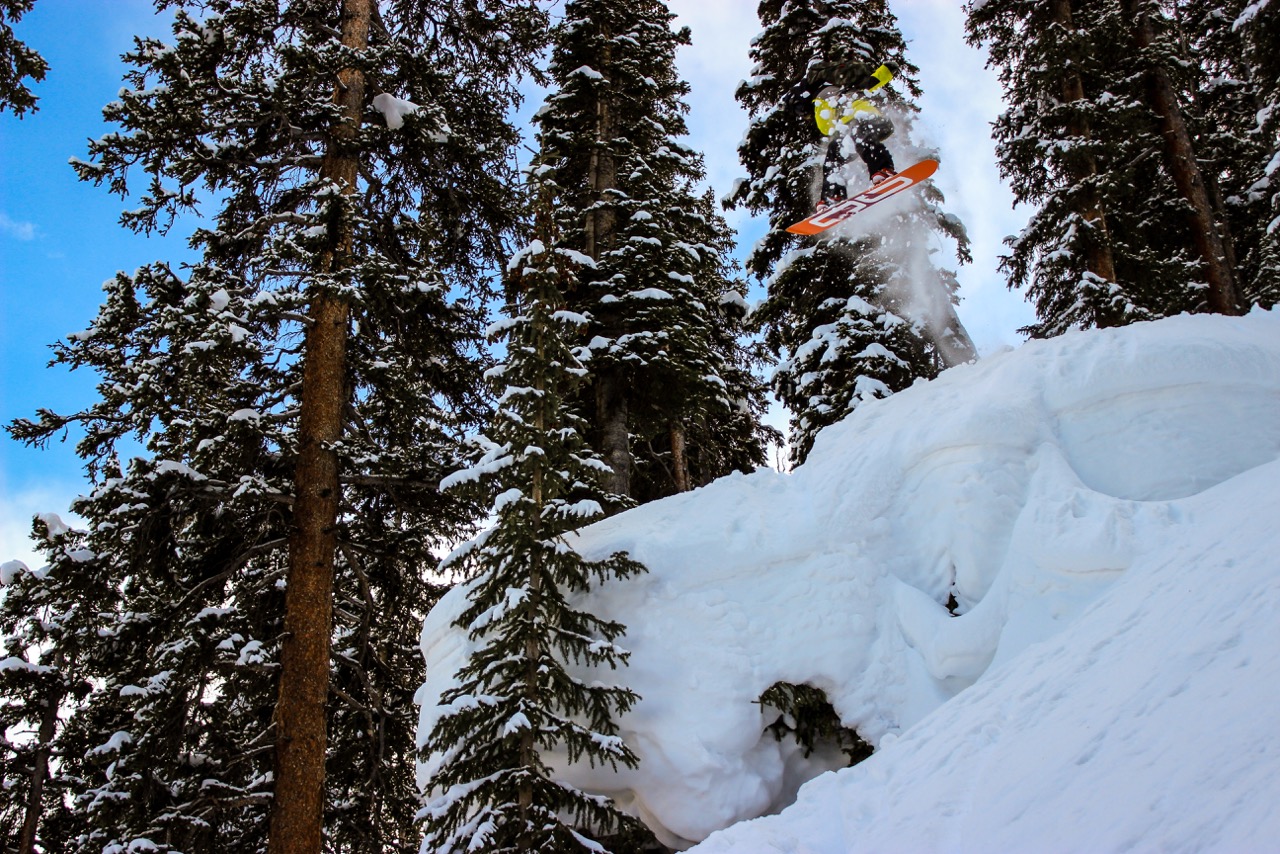 D was not a natural athlete. I could tell he was a man who had earned every victory. Yet he was hands down the most fluid artist I’d ever seen. He approached the terrain with a vivacious compassion. And as we descended he would casually slip precious on, only to reappear yodeling through all time pillow heaven. I suppose you couldn’t really blame him though; I mean we all have to keep our secrets.

At one point D made a sweeping turn in front of JoMon and me, instructing the “children” to follow him. We squirreled our way into a meadow, he dubbed, “the 7th layer of heaven.” I swear top to bottom the whole 15 foot base was untouched.

I tried to impress him, but that was obviously never going to happen.
“Uh, I guess, because it reminds me: life is about sacrifice. I think everything is earned by overcoming fear.”

“Does that end, the fox and the hen?”

We were standing together, yet worlds apart. The midday sun played through the spruce bristles, as the snow captured their dance.

I thought I heard an answer from the lush evergreen forest, asleep under 5 months and 400 inches of arid champagne powder.

“I love the snow because it asks me to be vulnerable, to create art with nature. It reminds me that the options are infinite, but ties me to the moment, and forces me to conquer.”

With that, he took off down the mountain, inviting a game of catch me if you can. 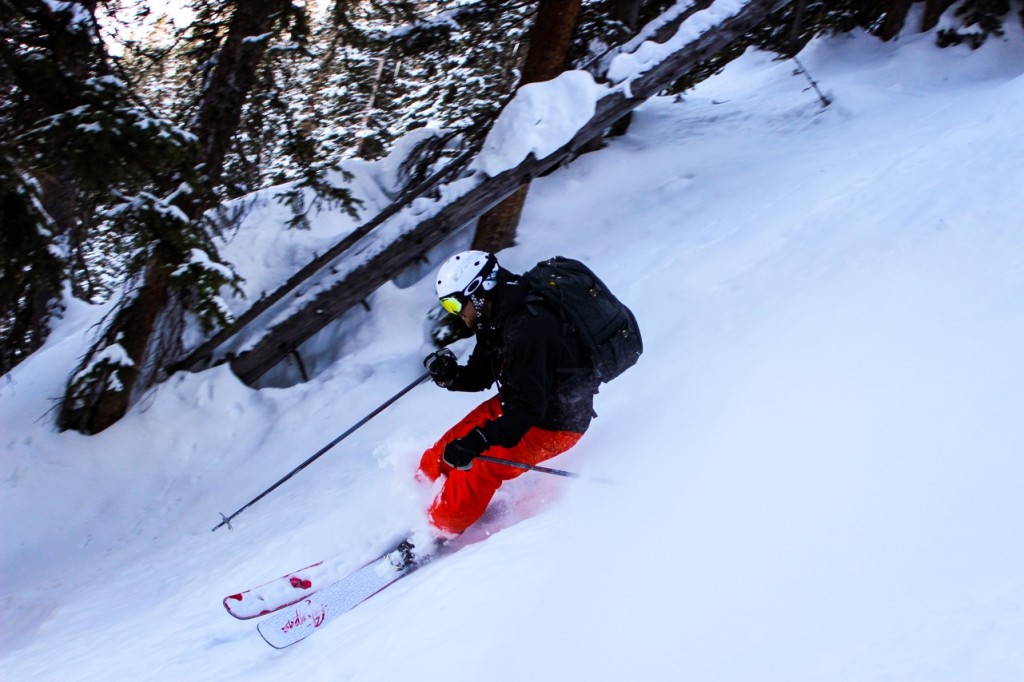 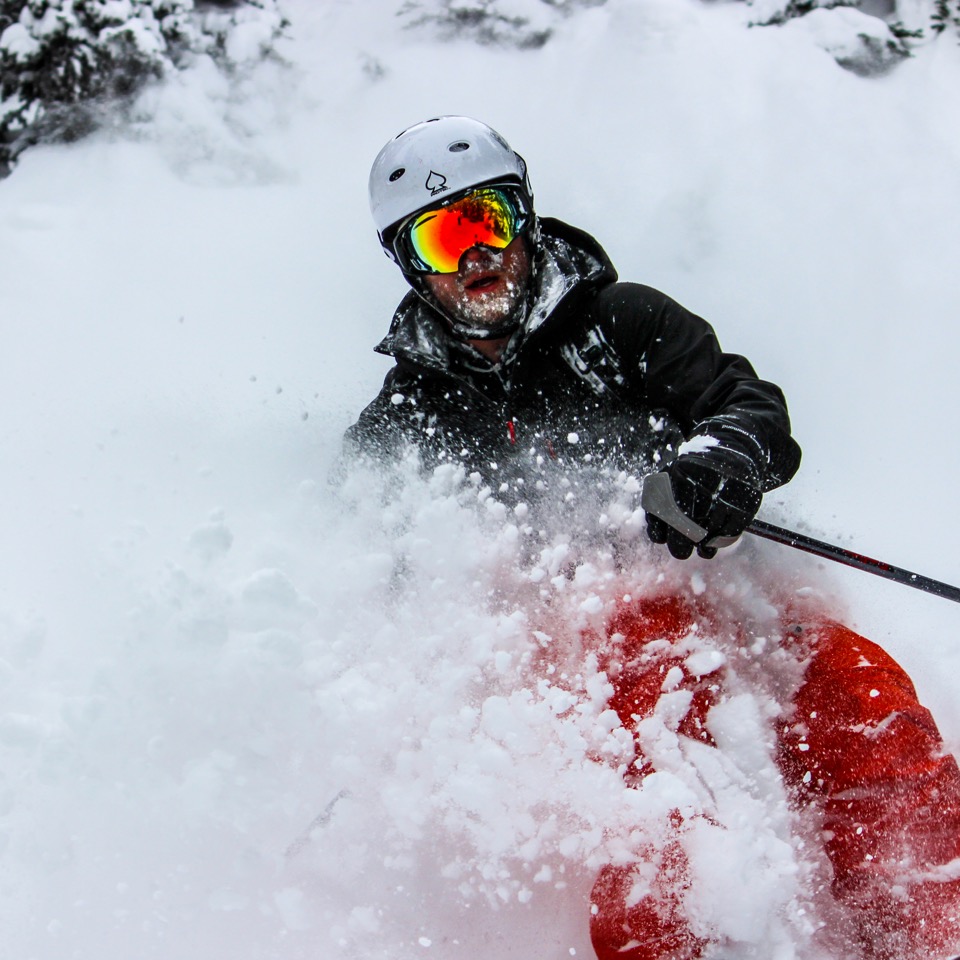 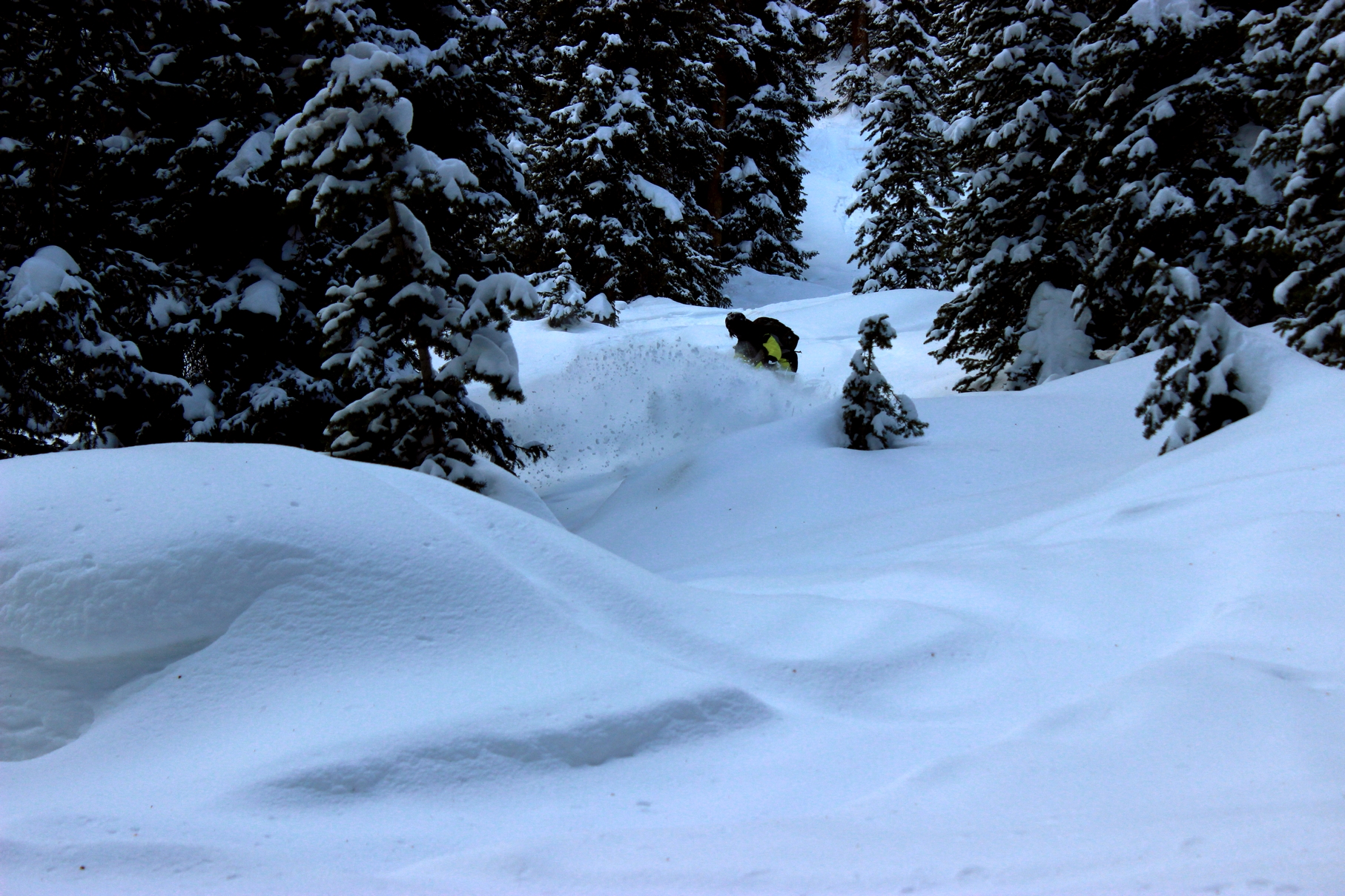 We exited the meadow into the land of Gnarnia, a quarter mile natural half pipe littered with mini golf booters into bottomless powder. Riding the wake of D’s line, breed meekness, but also, possibility. The run funneled down into a pinball zone of baby pines and tight cliff lines. Yet, from our perch we could see D exiting, chasing down a departing Town of Vail bus.

When we unloaded the bus at Golden Peak we were greeted, “oh the children, they so sensitive.”

The three times I was nearly impaled by a tree paraded across my vision. D interrupted…

“Child please, I don’t play with those excuses.”

We chased the sun out to East Marvin’s to peek into two areas named NBA (Nothing But Air) and CDC (Charlie’s Death Chute). At that moment I was pretty sure D’s dreams where my nightmares. But JoMon, well that kid was being a real hero. I mean, it’s not to often you get to ride with someone whose stoked for blind 30 foot drops into runs named Charlie’s Death Chute.

Vail has an unbelievable amount of out of bounds terrain accessible from the resort. Some of the most popular areas include WFO trees, Cyber Stash, Tony’s Run, West Vail, and Mushroom Bowl. In the winter the eastern front earns the handle the Dark Side, because the sun sets between 230-3. But as spring stretches on quick thunder snows catalyze with a stabilizing snow pack for epic lines; while the late light makes for all time photo ops. 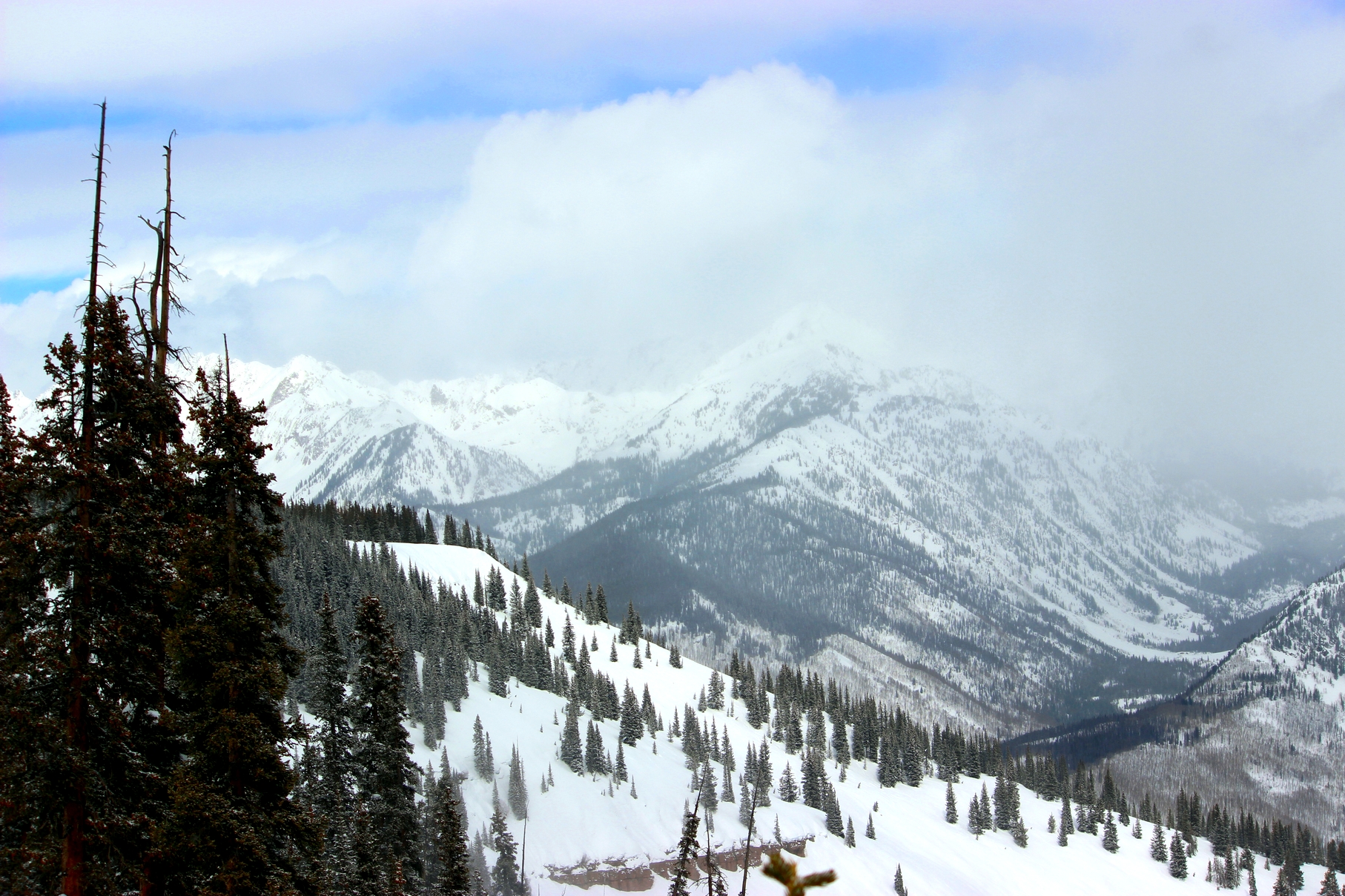 Upon summiting Marvin’s the clouds began winning the battle for control of Vail. Setting the stage for mother to drop one of her illustrious Gore range curtain closers.

“You kids gonna to fish or cut bait?”

I was standing in the middle of a world of inescapable beauty, distracted by fear. I looked to JoMon’s energy for direction. Kid was chugged full, like a rabid Pavlovian dog after dozen bells.

“Nah, D, showed up with an appetite.”

My eyes locked with D’s for the first time, tasting the passion from his cup. He was an experience pedantic, a blue spruce of adventure. A wanderer not leashed by memories or dreams; sewn in to the fabric of Vail.

As I left his focus, I fell into the moment just registering the exhales. The fat of my lobes stung as mother’s winter breath blasted by. I grasped for the wind, hoping for it’s secrets. She left an aftertaste of minty evergreen as the forest river danced in anticipation of spring. Of course she was happy today, but not without her troubles.

When pondering whether to shoot the duck or not: Mozart says, “The music is not in the notes but in the silence in between.” In the backcountry the power move can often be just to step back from a line. Sometimes though, I’m just fiending for a choice. Last spring the cornice above CDC rose 30 to 40 feet in spots. Cornices are inherently dangerous for many reasons. Our main concern last April was cornice collapse, plus the area had been ravaged by a D3 avalanche with a fifteen foot crown; claiming  Tony’s life a few months earlier.

For me, tragic incidents likes Tony’s warrant an utmost respect for terrain/slide paths. Attempting a line like CDC is quite humbling, because you want to ski it, yet, you are conscience of the severity and repercussions if shit hits the fan. Humility is a discipline stashed in every backcountry enthusiast’s quiver.

Having skied the other notable lines in East Marvin’s (NBA and Old Man’s) I was familiar with the zone. A lot of the bigger Vail lines (King Tut’s and Timber falls) only go in the spring. As a result, every April, the Vail side-country becomes a premiere destination for adventurers craving an extreme spring corn harvest. After determining the main entrance for CDC was not safe; we were able to make reservations at the High Dive just skiers right.

A stable snow pack, a strong crew, plus my Fatypus D’riddums, and it was time to take off the training wheels. I checked in with my Mountainsmith Borealis bag toting a DSLR camera and avy gear. Then throttled up the Gsisk and dove in. 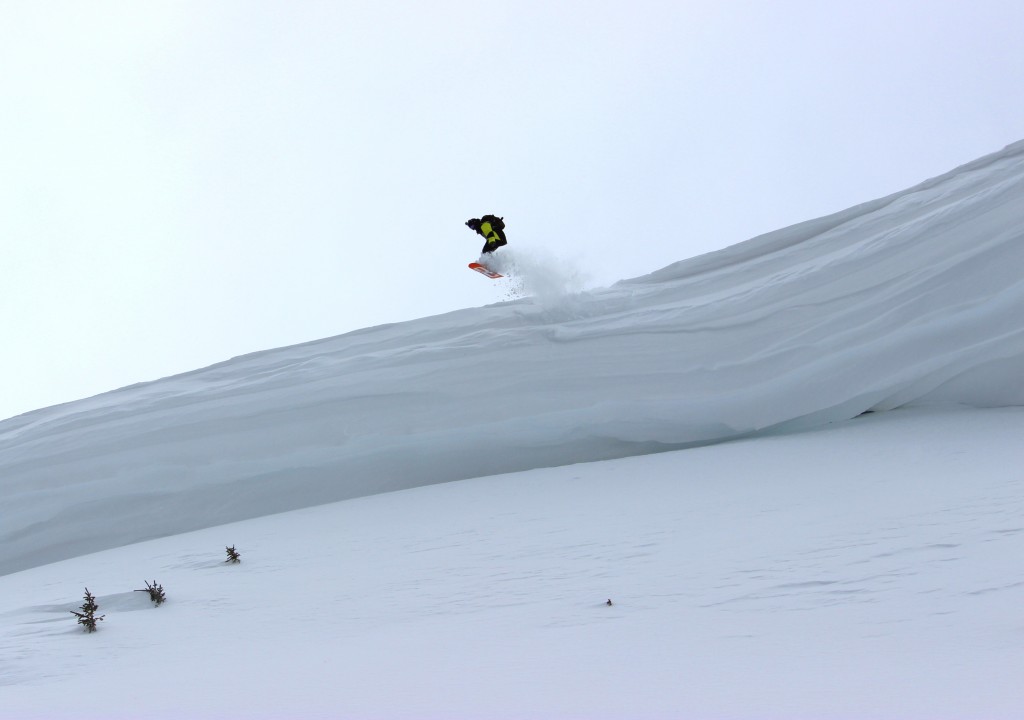 I thought on vulnerability. Was a connection like that possible: to allow nature to be an observer and critiquer of our experience. As I connected a few turns toward Forever Trees I caught three Ravens tangoing with the wind, wondering, if I could push further. 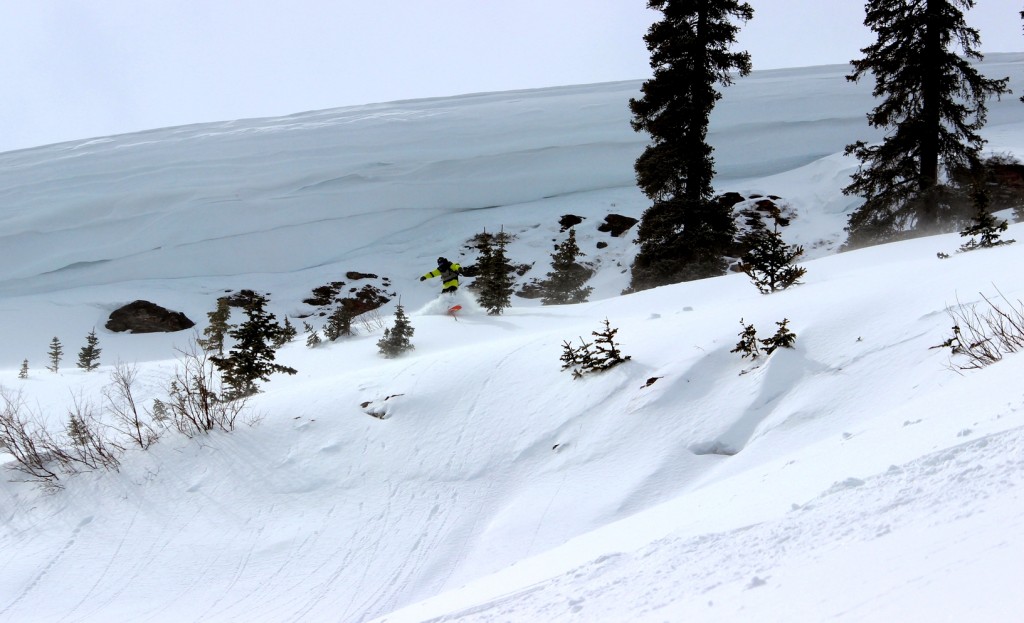 With any out of bounds or backcountry area it is vital to develop a homeostasis with the terrain. Conditions are constantly changing, so one should be keenly aware of each aspects story. I grew up in Virginia and only came to know Vail while studying at CU Boulder. When I step into a new zone, my approach is: “what can this terrain teach me?” Use every resource available to extract knowledge including the people you meet in the backcountry. If you holster a high backcountry IQ, don’t be afraid to ask fellow adventurers if you may tag along. 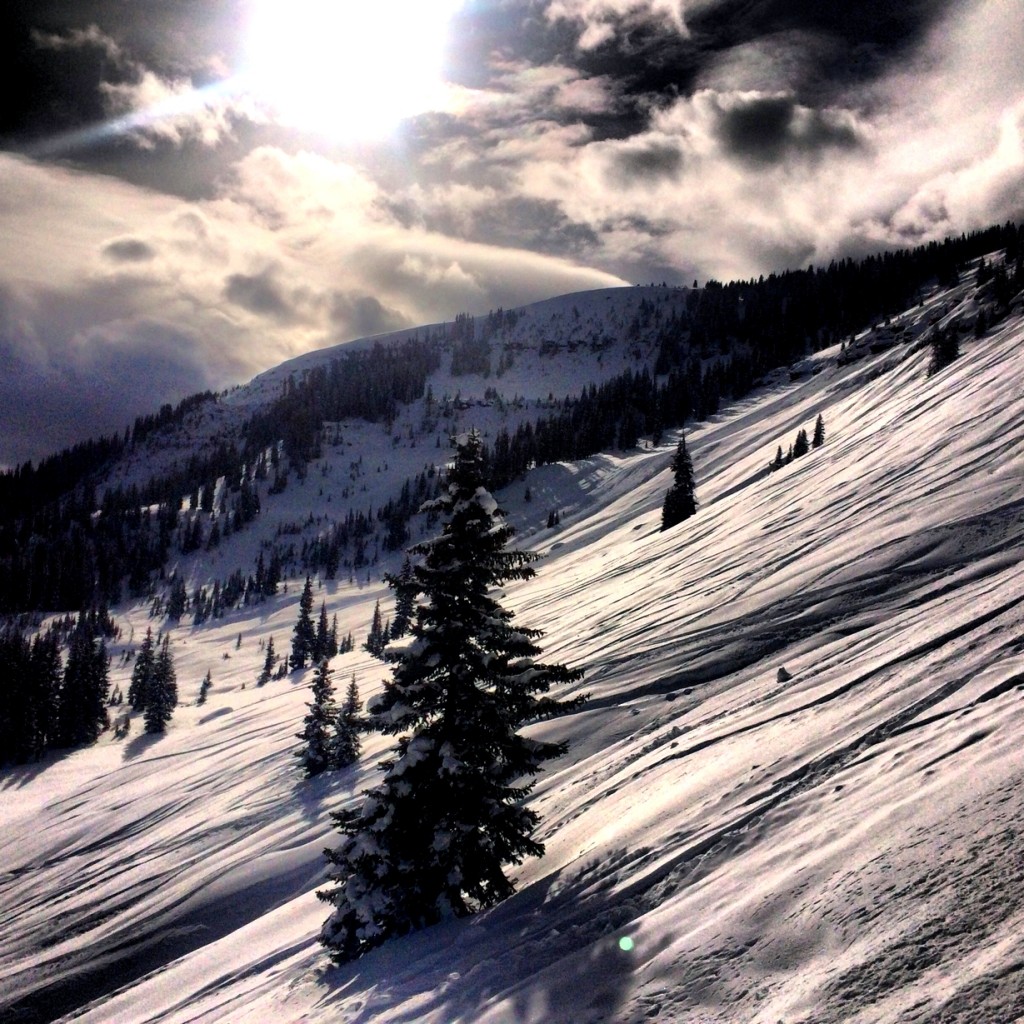 Before heading back to the village, the Sherpa stopped these disciples to drink in one of those sensual Vail sunsets. As the dimming sun pulled purple wisps of storm clouds off Abraham’s glorious eastern slopes, D stopped me and told me a story I will never forget.

“So brother, I was skinning up through Pitkin when I came across this little squirrel. The child welcomed me to his kingdom; so I asked him, “What’s up baby squirrel!? How you enjoying this East Vail chowder?” That sucker glared back at me and hit me with, “Man, what the hell is East Vail.”

Well kids, welcome to the world of “big lines, powder, and air.” 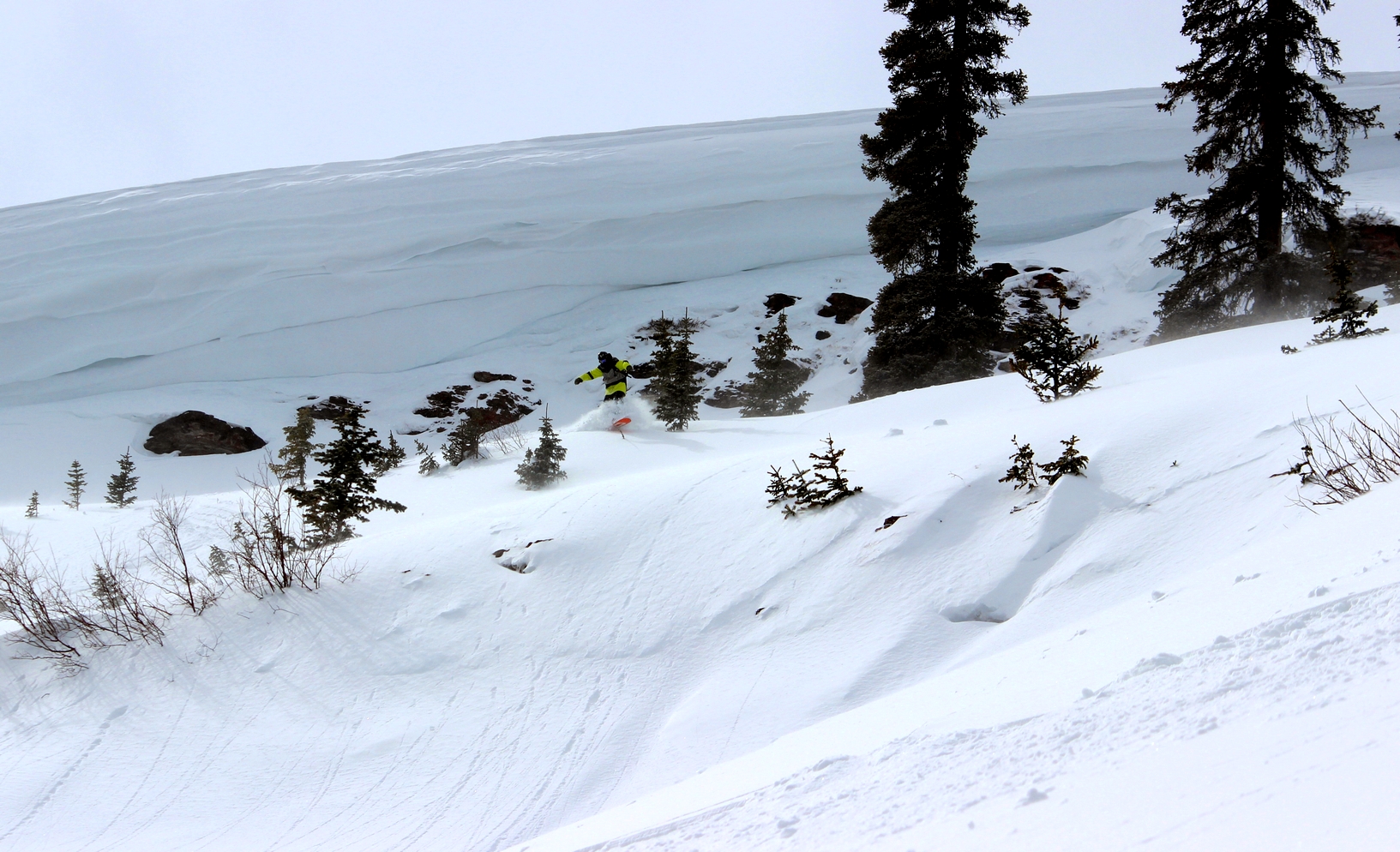