Silverton Colorado, home of the Hardrock 100, sits 9,308 feet above sea level. That’s a lot of thin air to start a hundred mile run, add in 30,000+ plus feet of elevation gain (Mt. Everest tops out at just over 29,000 feet), some insane weather (Adam Campbell got struck by lightning this year…) and you get one of the hardest running events in the United States.

I arrived in Silverton Tuesday afternoon after a beautiful drive from Denver and met up with the Journey Film crew who I would be working with. This team is extremely talented and pulled in some great camera men, a genius DP, editor, and producer. Literally everyone I worked with knew their job and knew it well. 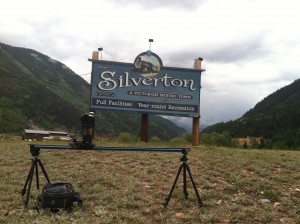 Shooting ultras or any type of outdoor sport is hard work. Not “I have to sit on a set all day” type of work but “run up mountains carrying camera gear on no sleep in the rain, get the perfect shot, then run to the next location ahead of the fastest mountain runners in the world” type of hard work.

To make the work “easier” we scouted locations before the race and planned out every detail. I would be shooting near Chapman Aid Station, Enginerr Pass, and Maggie Gulch along with two runner/camera guys we had. My main shots would be timelapses of the course showing the extreme ruggedness of the San Juan Mountains but also to get shots of the actual race.

Juan, would be driving with me to Chapman, going over Ophir Pass, to shoot runners on a mountain outside of the aid station. Juan ran a bunch of miles this race with a camera to get those shots that only come from putting in tears, blood, and pain. I’m not sure how much pain he was in since the month before Juan ran the Reno Tahoe Odyssey, a 187 mile relay race, solo. Let me say that again, Juan ran 187 miles in some ridiculous time as training for the Tahoe 200.

When Juan and I made it to the top of Ophir Pass we had some time before the first runners would come through the aid station so we stopped to shoot a timelapse at the pass. Simply incredible to be at 12,000 shooting beautiful morning light in the San Juans.

No crew or media vehicles were allowed at Chapman so I had to hike in a bit to get near the aid station. I ended up near a rickety bridge made of a few small trees which crossed a river. The bridge was slick after being saturated with a week worth of intense afternoon showers. I shot runners who either took their time crossing the bridge or just plowed through the icy stream. After a couple hours of standing in the freezing water and seeing the top men go through the aid station, the runner/cameraman, Joel, I was waiting for showed up and we left for Engineer Pass. 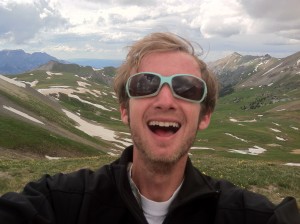 The road to Engineer Pass is pretty rough. Lots of rocky miles, lots of elevation gain, steep cliffs, and mud made the trip up pretty exciting. Joel and I shot a couple lapses while waiting for runners to come out of the gulley and up the big climb to Oh! Point. Killian Jornet, who was the third runner in to Chapman a few hours before, now had a huge lead at this point. He made the climb smiling and talking like he was just out for a morning jog at sea level. Incredible. After Killian there was a lot of waiting until the runners behind him showed up. Dakota Jones and the rest of the pack looked trashed at this point, a far cry from the strong Killian who came through earlier.

After hiking up and down the steep climb and snow field, Joel came back along with Juan so we could go together down to Grouse Gulch to meet up with a few of the other vehicles. At Grouse we dropped off Joel then Juan and I raced to Maggie Gulch in the dark and rain to catch the lead pack. 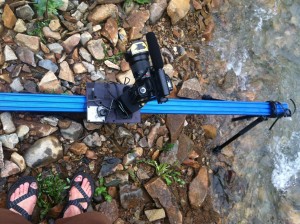 Juan and I got to the Maggie Gulch Aid Station and the camp’s friendly volunteers greeted us with smiles and some hot water so we could make some mate/coffee to try and keep warm. We were going to spend the night up there shooting timelapses and getting night shots in the gulch. Easier said than done. It rained most of the night with temperatures around 40 degrees making our shooting locations wet and muddy.

Killian was the first to come in. He was wet and a little cold but still looked strong as ever. After he left the aid station we learned that most of the favorites dropped and now there was an even larger gap between the leader and the rest of the runners.

Compared to the rest of the crew we had it easy. A couple of our guys got soaked and stuck after shooting at Handies Peak. Hunkering under a tarp with wet clothes and sleeping bags they waited for hours to be rescued. We were lucky enough to keep ourselves and gear relatively dry.

Juan and I tried our best to get some sleep between gaps as runners came in. Around 5 am we headed back to Silverton to see the finish. When we got there we discovered we missed Killian’s finish as he shattered the course record. Later, Adam Campbell came in and told the story about how he was hit by lightning while on top of Handies Peak. He kept running and finished third. That’s Hardrock for you. No one has it easy. Not the runners, their crews, the volunteers, or the media.

In the Kayak film “Cascada” Anson Fogel says “Athletes, artists the line between the two is gone now.” I couldn’t agree more. To be an outdoor photographer you must be just as fit as the athletes you are shooting.