There is a special magic to backpacking that holds the ability to keep you humble. No matter how often you go it always hurts, the soreness and relief of dropping the pack at your camp for the night is consistent. The only thing that gets easier is the way in which your mind adjusts to that fatigue. Explaining this to someone that is exploring the backcountry for the first time at the trailhead seems like it may go in one ear and out the other. Once day 6 hits and they are waking up to their last frozen morning in the sierras looking back at those words with a new understanding.

Foster the Earth (FTE) provides foster youth and young adults who are aging out of the foster system a rare opportunity to connect with nature and experience wilderness through hiking, wilderness skill-building, and backpacking. It is an 8 month program ending with a 7 day trek, this year it was 40 miles up to the summit of Mt. Whitney, (14,505ft) the highest peak in the lower 48 states. It seems ambitious knowing none of the participants have ever been backpacking, but with each monthly hike they gain the necessary strength and confidence by increasing the length, altitude, and weight carried. Foster the Earth believes that time pushing your boundaries out in nature can teach you accomplishment and independence that you can apply to all other aspects of your life.

Day one was full of adjustment and adaptation to life on the trail. Starting the hike at 10,000ft was a shock to many of their bodies, properly preparing with excessive water and a nights sleep at this height allowed everyone to start the trek without any signs of altitude sickness. Arriving to camp just before sundown, they tested their new talents of re-hydrating food for dinner. Shortly after everyone crawled into their tents for bed, it set a good precedent on how the remainder of the trip would go.

That next morning was one of the toughest. Muscles are sore, feet are frozen, and 7 days feels very far away. The same strange clouds harbored above the camp as the night before, providing two shows of color to remind them of the magic of the outdoors. After breaking down the tents and some words of encouragement they were back on the trail with their packs feeling heavier than ever.

Paces differed but we reached our objected goal with each of the coming days. Knees would wobble and rely on our Halite Trekking Poles. They were used as extra legs to take pressure off the knees and help balance on logs during the various river crossings. No one can ever come to a group conclusion whether uphill or downhill is easier but the flat top of every set of switchbacks is enough to make anyone smile.

By day 5 it was all a routine: start hot water, filter and fill water, brush teeth, break down camp, load pack, eat breakfast, attempt to stretch, remind each other how badass they are, go over the day’s hike, cheers the trekking poles and start walking. Sounds simple and mundane from the outside but this trail would weave between meadows and valleys that exposed several faces of the Eastern Sierras. Hiking between 3 different national forests, Inyo, John Muir, and Sequoia-Kings, all with their own breathtaking vistas and unique history.

Day 6 was summit day. There was a strict schedule to make it to the top of the ridge by 10 or the peak of Whitney would have to wait for another trip. It can be hard to make those decisions when you know the participants have worked so hard to make it to that point, but safety holds precedent out in the wild. Everyone decided a 4300 wake up was a wise choice to ensure enough time to make the summit by a safe hour. It also opened the door for one of the most beautiful sunrises during the whole week. By then the team was in an internal mental debate as the body asked to sit on the perfect rock, but your mind knew the air would be sweeter at the top. The cutoff time was 10 o’clock for the Whitney Summit trail head and by 945 the last few hikers came around that last switchback with proud tears of accomplishment and joy flowing down their face.

Dropping the packs at the summit loop gave everyone a moral boost. Others descending would say “You’re almost there!”, “Good Job”, “It’s better at the top!”. The encouraging community of backpackers is something to learn from in itself. Everyone in different bodies all fighting their way to that euphoric feeling of looking across at a wide stretched canvas of new places you can grow to explore. As the summit was reached, it felt as if there was a party there waiting. People trading photos and good conversation of their own unique journey to the top.

As we all know, what goes up must come down. After adrenaline pumps the energy of excitement through every vein everyone seemed to tire out. Now on the way to the last camp the famous 99 switchbacks refused to go unnoticed. Some power walking downhill to see camp that much sooner, and others’ knees asking for more weight on the trekking poles with each step. Regardless camp was reached as the moon was given its time to shine. The next day would be the last. As much as everyone wanted to discuss sentimental moments across the past week their bodies sent them to the coffin of their sleeping bags as soon as the food was finished.

“Physically, this experience was one of my hardest challenges, a week long journey filled with heavy exercise may seem daunting but having the three wonderful and badass leaders provide support when necessary made the mental challenges not worrisome at all. No amount of pain stopped me. My mind was stimulated and ready to do whatever faced us, and despite mild back pain, and some very present shoulder and feet pain, I would continue. Once I was so fatigued I laid down arriving near camp and shed tears after Whitney. Those tears were emotional ones from realizing I made it up to the top, and back down the famous 99 switchbacks.”  – Gabe

Everything with the trip went perfect. September in the Sierras is a temperamental month that can either snow or hold onto the heat of an Indian Summer. 7 days of sunshine and wind not exceeding about 20 mph was a very lucky aspect to this year’s Sierra trip. It’s nice how nature can humble you but also gift you with great strength through the sun’s rays or a vacant blue sky.

Whitney is a heavily populated trail and it served as good acclimation to being back in civilization. When the group walked through that Whitney Portal trail head it felt as if it was the ending of an adventure film. Contrary to the popular assumption that everyone would sleep the entire 5-hour van ride back to San Diego, they sang songs and made future plans to see each other again. Not one person the same as the week prior.

Nature speaks through feeling, hopefully teaching you to enjoy the little things and fight for the wild places we’ve grown to love. Whether you are an avid backpacker or enjoy a subtle stroll during the weekend, you know that nature holds a place of peace from the pace of many of our day to day schedules. If you are new to exploring the outdoors let this story tell you that no matter how experienced, with the right mentality and moral support anyone can go venture in the various national parks this country offers. If you are an experienced backpacker, take a friend that has always wanted to go experience it for themselves. I’m sure you would see those same trails with new eyes. I know I did. 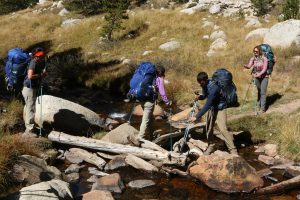 Ryder England is a friend of and contributor for Mountainsmith as a professional photographer and writer. He lives in southern California and also works for the non-profit organization Foster The Earth as their Program Facilitator.

Want to get involved with Foster the Earth? Visit their website, here!