As a Colorado native, my blood runs deep in the Rocky Mountains. My dad had me camping when I was six months old, up my first mountain at four, and atop my first 14er at seven. Over the years, I developed a passion for the outdoors, and in September of 2013, this passion took me overseas to climb Mount Kilimanjaro—the highest peak on the African continent.

After a summer of training at paltry altitudes of 14,000 feet in Colorado, I set out for Tanzania with two friends of mine from college. Being that it was the dry season, we arrived at the Kilimanjaro airport in a cloud of dust, which shielded the masses of Kili from view. But as we neared the peak, a faint outline of this giant mountain could be seen towering into the sky. I felt like a kid on Christmas morning. I had been waiting for this moment for the past six months. 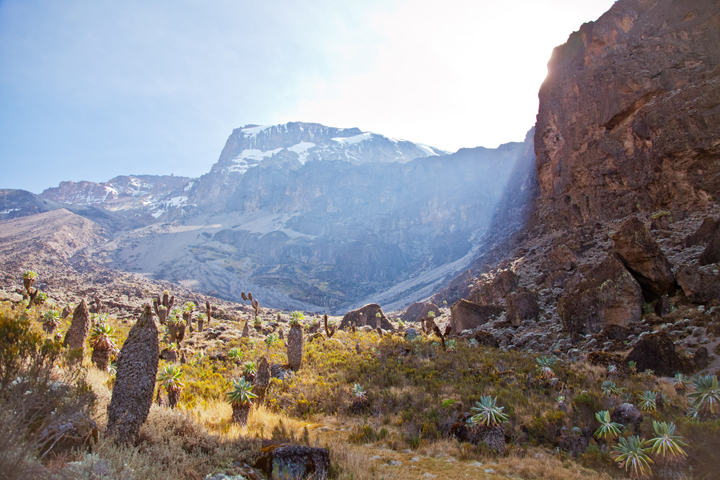 I have never been one to underestimate a peak. I always felt it was a sign of respect for the sacred beauty of creation.  And with this, I fully expected a rough and rugged trip up Kili. Instead, my group and I were greeted with the most glamorous hiking and backpacking experience of our lives. Each day, we carried only an extra layer and water for the hike. All the while, our porters hurriedly carried the rest of our gear up the mountain. We rarely, if ever, broke a sweat, and each afternoon as we made it into camp, we were greeted with a stocked mess tent, warm water to wash up with, and more food than we could eat. We were living the definition of “glamping.” Thankfully, this glamorous backpacking experience allowed us to better take in the surroundings on this African peak. Our route—the Machame route—circumnavigated the entire south side of Kili. With this, each new day brought different views of this majestic mountain. 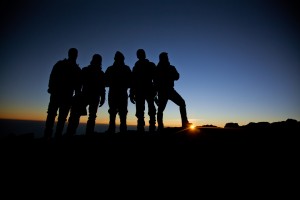 In all, the three “peak baggers” in my group had a support staff of eleven Tanzanian porters, guides, cooks, and waiters. At each camp, there were perhaps one hundred other summit hungry people with similar amounts of support staff. Just like hiking up a 14er in Colorado, you don’t climb Mount Kilimanjaro for the solitude. So when our guides gave us the option to climb Kili at sunset, we jumped at the rare opportunity to have the summit all to ourselves. 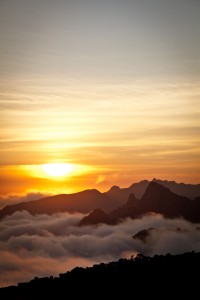 At about 2pm during our last day on the mountain, we set out on the final summit push. Over the next four hours, we hiked at a slow, deliberate pace up over 4,000 vertical feet. The terrain was the steepest of the entire hike, and the altitude tried to play tricks with our bodies. But up and up we went. Finally, around 6pm, we had reached the homestretch with summit signage in full-view. Adrenaline kicked in, and I felt like I almost sprinted the final hundred feet. With the summit to ourselves, we watched the sun set into the glorious African horizon. Never had I seen anything so beautiful.

Throughout my entire hike—from base to summit—I had Mountainsmith’s Swift FX pack around my waist. Before my hike, I knew I needed a better solution for my Canon 5D Mark II camera than the cheap Chinese sling pack I had used for so many years prior. The Swift held my beefy camera with ease, but more importantly, it kept my camera at arm’s length throughout the entire hike. The Swift proved to be the perfect sized pack for my needs—not too big and not too small—with plenty of extra storage for everything from memory cards and trail food.

Put simply, I could not have dreamed up a better camera bag for this hike. I sincerely thank Mountainsmith for the opportunity to use this pack, and I see nothing close to its rival on the market.