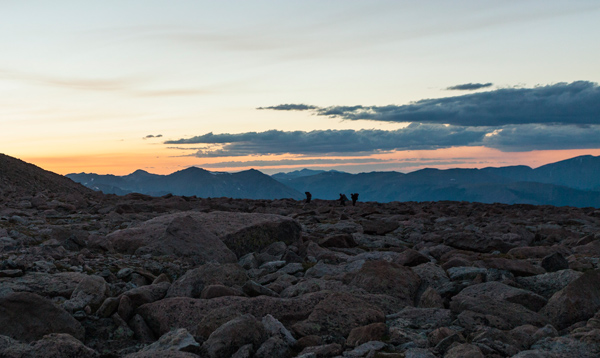 Longs Peak. Anyone living in the Front Range of Colorado has heard of this fourteener complete with rock scrambling, steep cliffs, narrow ledges, and an extremely early morning start (between 1:00 and 3:00 a.m.) for day hikers. More than 50% of those who attempt Longs don’t actually reach the summit, the highest point in Rocky Mountain National Park and the northernmost fourteener in the Rocky Mountains. But when we moved to Colorado a year ago, we decided we would summit Longs  within the year. That was our goal. Every climb, every hike, every scramble, we pushed ourselves so that we would be ready. The running joke of summer hikes became “Longs will be that much harder.”

In March 2016, we came home from an amazing trip in Canyonlands National Park, Utah and quickly realized we should book some overnight stays in Rocky Mountain National Park. Along with a two-night trip in the park’s Mummy Range in mid-June, we went ahead and booked a night at Longs Peak’s Boulder Field for August 12. Little did we know that this would be the night of a meteor shower and would present some of the best weather conditions Longs has seen all season. 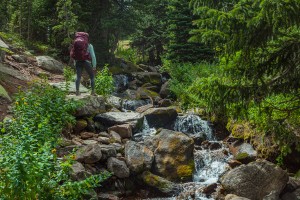 Day 1: To the Boulder Field

We started the trail, packs weighed down heavy with water and supplies, only to realize that water sources are available up until the Boulder Field. We brought 5 liters each, an extra 11 pounds both of us could have avoided altogether…but on we went, climbing and climbing, grateful for the sunshine. 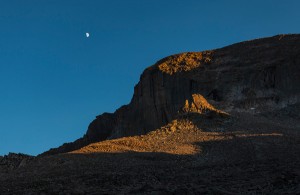 Pausing twice on our way to the Boulder Field, we enjoyed the peaceful flow of a waterfall just below treeline before ascending to where the trail splits for Chasm Lake. Here, we had a nice view of Peacock Pool just below Chasm Lake and then it was more uphill to our campsite. We, quite literally, went around the mountain before starting switchbacks up to the Boulder Field. Before we knew it, we were home for the night. 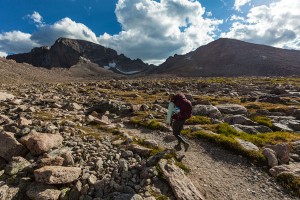 Rock piles abounded, and as we looked up at our summit for tomorrow, we started to realize that this wouldn’t necessarily be the challenge we thought it would be. Sure, our legs were tired, but up until this point the hike was no more challenging than the others we had experienced and used as training. We didn’t want to speak too soon, as the most difficult climb was still ahead, but it seemed to us that all of our summer adventures had prepared us more than we had expected. 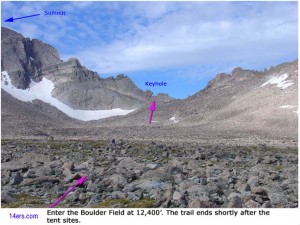 Alarms set, one for the meteor shower and one for our wake-up call, we climbed into the tent just past nine o’clock. We had a clear night with only minimal wind, yet when we woke up to see the meteor shower, there was a haze over the horizon that made the stars seem fuzzy. Light pollution flooded our vision of the night sky. Even still, we were able to make out a few shooting stars, firing us up for tomorrow’s climb. 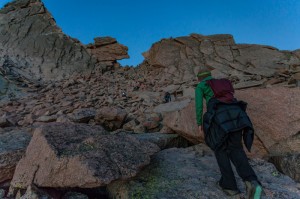 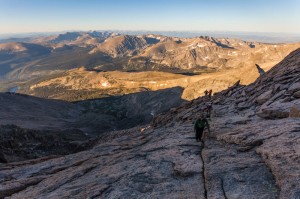 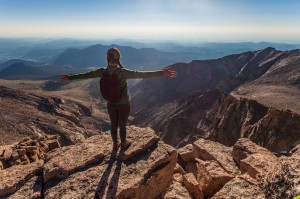 Up and at em’ at 4:30 AM, I detached the day pack from my Lariat backpack and hit the trail. We assumed we would be the first ones on the way up to the Keyhole. We couldn’t have been more wrong. Headlamps as far as the eye could see were like ants crawling their way up the hill. We quickly assembled our gear and joined the masses. An easy scramble up the Boulder Field and we were quickly up to the Keyhole. Here, many a day hiker rested and took in the sunrise. We paused momentarily to take in the view and then continued on to the Trough. This was definitely the most physically demanding section of the trail, but we soon found ourselves above the majority of the crowd and onto the Narrows section. Around the mountain, up, down, and just a little ways up the Homestretch, we reached the summit just after 6:00 a.m.

Looking around, we were surprised at the flat top of the peak. Many people were already up, so we found the most secluded spot we could and just looked out at the horizon. From here, we had a bird’s eye view of Chasm Lake and could see for miles the surrounding mountains and valleys. Although didn’t except the mass of hikers and we had trained for more of a challenge, there was no feeling of disappointment up there. Just awe of the incredible beauty that is the Rocky Mountains.

We marveled at the resolve of so many people willing to make the trek up to the peak. At that moment, summiting Longs became less of a test or struggle for us and became more about the willingness to try something that is difficult. There is always going to be a difficult peak to summit, a heavier pack to carry, a longer way to go, but if you prepare and you meet each challenge with the determination to give it your all, you will never be disappointed.

Longs Peak from Behind the Lens 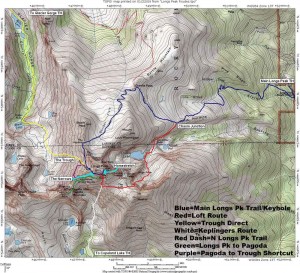